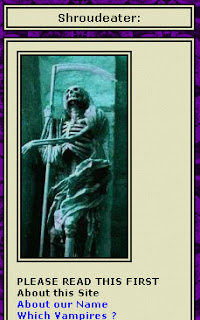 I recently mentioned Paul Barber's preface to the second edition of his Vampires, Burial & Death, as well as Rob Brautigam's Shroudeater site in another post. Paul Barber calls attention to that web site, while mentioning that 'theories sometimes crowd out the facts, especially on the Internet,' adding in a footnote:

'An important exception is Rob Brautigam, whose site (shroudeater.com) contains a valuable collection of material from many countries over many years. Brautigam has gone to great trouble to verify sources in the accounts he publishes there, some of which have evolved in moving from one book to the next. In one case (that of William Doggett) he demonstrates that a vampire was eventually inserted into a story that originally wasn't about vampires at all.' (p. v-vi)

Brautigam recently updated the site with a large number of 'cases', this time including an index by place name instead of by country alone, even indicating alternative names for various places.

I have only taken a brief look at some of the new entries. One of them concerns Marienburg and is placed in Poland. Curiously, Montague Summers in The Vampire in Europe refers this to Tyrol:

'In his chronicle under the year 1343 Sebastian Moelers relates that during a terrible visitation of the Black Death cases of vampirism were numerous in the Tyrol, and the Benedictine abbey of Marienberg was much infested, one at least of the monks, Dom Steino von Netten, being commonly reputed to have been slain by a vampire.' (p. 160)

As is sometimes the case, the original source text is not easy to locate online, in this case Sebastian Möler's Prussian chronicle. Brautigam refers to a book from 1837 that clearly places the occurrence in Lauenburg (today Lębork), and not Marienburg (today Malbork), both near Danzig (Gdansk) in Northern Poland. I found a bit on it on p. 53-4 in Reinhold Cramer's Geschichte der Lande Lauenburg und Bütow (1858) (see below), which clearly shows that this has to do with a dead person's corpse that keeps turning up outside the grave, until it is forced to stay there by being punished with a sword and reminded of an oath taken by the deceased while alive. As such, it is certainly farfetched to claim that it is an example of a vampire per se. Unfortunately, Montague Summers's vampiric version set in Tyrol must be considered a figment of his (or charitably, perhaps someone else's) imagination, as Brother (not Dom) Steino von Retten died from the epidemic illness that he tried to flee, not because he had been 'slain by a vampire.'

As Cramer says, this story is so wonderful that it sounds more like a fairy tale than a true story, but must be considered one of the stories concerning Medieval miracula mortuorum that are recounted by various authors, including Dom Calmet.

Those interested in factual background information may find it worth taking a look at the appendices in Cramer's book.
Posted by Niels K. Petersen at 11:00