A Swedish study of the vampire tale

Swedish Anna Höglund this December defended her thesis on Vampyrer. En kulturkritisk studie av den västerländska vampyrberättelsen från 1700-tallet till 2000-tallet: Vampires: A cultural critical study of the Western vampire tale from the 18th to the 21st century at the university of Växjö. As far as I can tell from a Swedish news story, she probably mostly deals with fictional vampires, analyzing them in connection with their cultural and political context, and finding that the vampire character is used to express political points of view. Her thesis consists of two parts: one detailing the evolution of the vampire from folklore to modern fiction, and the other explaining this development in terms of the ongoing changes in politics and ideologies.

Anna Höglund apparently plans to teach a course on vampires and horror at the new Swedish Linnæus University.

A paper in Swedish by Höglund on 'The impotent vampire: Vampires and sexuality in the contemporary vampire novel' is available online: 'The vampire's hunger and his bloodsucking have by researchers mostly been interpreted as an expression of the violation of tabooed sexual acts. I think it is time to add more nuances to the image of the vampire's hunger, and I wish to claim that the contemporary vampire rather hungers for food than for sex. Food, the hunt for food is what takes up all of his existence. Blood is what gives him pleasure and sensations of lust, not the intercourse. The sexual desire belongs to the victim. The human interpretation that the vampire finds sexual gratification when he violates her is a projection of the victim's own emotions. This is not to say that the vampire has lost his role as a revolutionary breaker of taboos. In the contemporary vampire novel the genuine taboo of our times is dealt with: the food trauma of Western civilization.'
Posted by Niels K. Petersen at 22:25 No comments:

My best wishes to everybody. I hope you will all have a merry christmas!

After a busy December I wish that I will find more time to post here on Magia Posthuma. 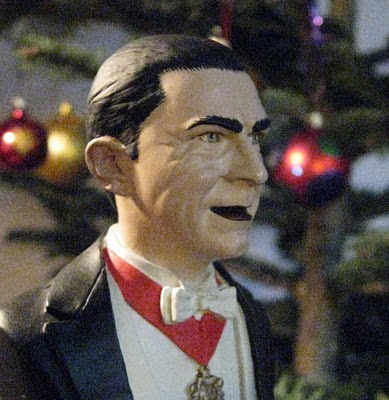 The examination of corpses and their consitution is an essential part of 'vampirology', so it is appropriate to find Mark Benecke on a list of the 25 Most Influential People in Forensic Science. Author of several books, including the one mentioned here, Benecke is also known for his appearances in TV documentaries on vampires where he explains how e.g. the apparent vampire state of corpses in the Visum et Repertum can be explained from the point of view of forensic science. Benecke has done a lot to explain the field to lay people, including children.
Posted by Niels K. Petersen at 21:38 No comments:

I am not sure what to make of this, but it seems that good old Imperial Provisor Frombald may inspire some kind of animated short?
Posted by Niels K. Petersen at 21:56 1 comment: