The origins of Van Helsing 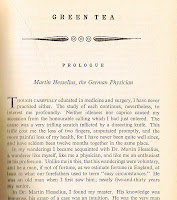 My last post made me look up what is said about the origins of Stoker's character Abraham Van Helsing in Bram Stoker's Notes for Dracula.

Abraham was the name of both Stoker himself and his father, as Bram is but a diminutive of that name, hence it has been suggested that Van Helsing should be 'an idealized self-portrait', but Stoker actually claimed that he was 'based on a real character', a 'highly respected scientist, who ... will also be too famous all over the educated world for his real name ... to be hidden from people'. Two possible candidates are Stoker's brother William Thornley and Max Müller, a German professor at Oxford.

The origin of the name Helsing is apparently unknown. Theories suggest that it may have been inspired by the fictional Dr. Hesselius of Le Fanu's In a Glass Darkly, the anthology that contained the influential vampire novella Carmilla, or by an alchemist called Van Helmont mentioned in one of Stoker's other sources.

Obviously, the personal characteristics of Van Helsing differ a lot from Gerard van Swieten. Whereas van Swieten was an enlightened man of science trying to end superstitious practices, Van Helsing talks of occult forces and believes in all sorts of posthumous magic. 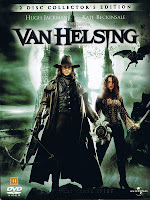 For some reason, some years ago Van Helsing became sort of a superhero vampire hunter in a dreadful movie that was certainly full of sound and fury but had nothing to say or contribute to the genre.

Fictional and mythological characters can turn up in various guises in surprising places. While writing this post, I saw Santa Claus walking by on the other side of the street from my house :-)
Posted by Niels K. Petersen at 12:25

I always find your blog so enticing! Really a good work, mostly because it is rigorous. Please let me know the title of the comic you used in this post. In my youth I had a graphic rendering of Dracula, but, unfortunately, I lost it. I would like to get another copy, but have not been able to identify it correctly in order to look for it over the Net. Best Regards!