According to Professor of anthropology, Yordan Yordanov, who has studied and reconstructed the head of the ‘vampire skeleton’ from Sozopol, the head is not only unusually asymmetrical, but it also shows traces of so-called incomplete or symbolic trepanation (or trephination).

Several examples of this kind of trepanation are known from Hungary (according to Berecki, Molnár, Marcsik, Pálfi: Rare Types of Trephinations from Hungary Shed New Light on Possible Cross-cultural Connections in the Carpathian Basin in International Journal of Osteantrohopology, it was fairly common there in the 9th to the 11th century, cf. also this blog).

The term symbolic trepanation was introduced by the Hungarian L. Bartucz in 1950, and Yordanov himself has studied the phenomenon on finds from the West coast of the Black Sea (Jordanov, Dimitrova, and Nikolov:  Symbolic Trepanations of Skulls from the Middle Ages (IXth - Xth Century) in Bulgaria in Acta Neurochirurgica Vol 92 (1988), issue 1-4, pp. 15-18). 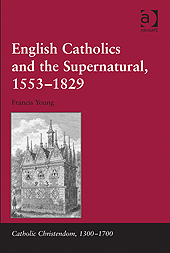 Whilst some aspects of the Catholic response have been touched on in the course of broader studies, few scholars have gone beyond the evidence contained within anti-Catholic polemical literature to examine in detail what Catholics themselves said and thought. Given that Catholics were consistently portrayed as 'superstitious' in Protestant literature, the historian must attend to Catholic voices on the supernatural in order to avoid a disastrously unbalanced view of Catholic attitudes. This book provides the first analysis of the Catholic response to the supernatural and witchcraft and how it related to a characteristic Counter-Reformation preoccupation, the phenomenon of exorcism.'
Posted by Niels K. Petersen at 09:09 No comments:

Here are two documentaries inspired by the 'vampire skeleton' find in Sozopol in Bulgaria. The first one is an incredibly dramatic and sensational 'history' of vampires from Russian Mainstream TV Company, while the second is a more straightforward documentary about the Sozopol find made for National Geographic. Neither are currently available online in English.

After being displayed at the National History Museum in Sofia, the purported Bulgarian 'vampire skeleton' has been returned to Sozopol on the Black Sea coast, where it was originally found. A reconstruction of the head of the deceased man from the 14th century has been carried out by Professor Yordan Yordanov, and was presented to the public in late May. Apparently a man of about 45 years of age, he is described as 'handsome as a Roman'. He certainly does not look particularly scary...

Having arrived safely in Sozopol, both the skeleton and the reconstructed head are exhibited at the Archaeological Museum in Sozopol, where they are expected to become a tourist attriction. In the words of Bozhidar Dimitrov: 'They are pretty disappointed in Sozopol that [the skeleton] is not with them. He’s been lying about long enough, it is time he goes and makes some money at the seaside.'

Cf. older posts like Archaeology as romanticism and ideology and Vampire skeletons, a Bulgarian Indiana Jones and the remains of John the Baptist. A video from the Sozopol exhibition can be found at Zona Burgas.