In the Footsteps of Dracula 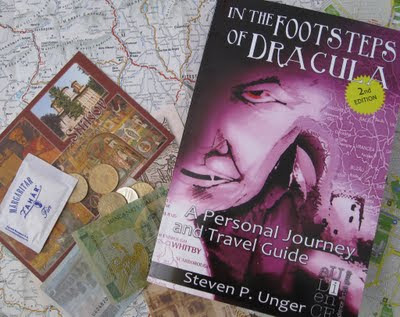 'Transylvania! To really be there at the top of the Borgo Pass, the site where Bram Stoker placed Count Dracula's "vast ruined castle," was the realization of a lifelong dream (maybe not everyone's dream, but it was mine). I was chilled to the bone by the piercing winds that overwhelmed the pale sunshine of May, but as I walked along the winding road that leads from Piatra Fantanele - the Romanian name for the Borgo Pass - to the borders of Moldava and the Ukraine, I knew in my heart that my journey had come to a successful end.'

Steven P. Unger's In the Footsteps of Dracula: A Personal Journey and Travel Guide (Audience Artist Group, 2010), available in a revised 2nd edition, is a highly personal, but also practical guide to 'Dracula tourism', i.e. traveling to Romania, Great Britain and Ireland in search of Bram Stoker's vampiric count and the 15th century prince who is usually regarded as his historical counterpart or inspiration. Abundant in black and white photos, anecdotes and tips on how to travel around Romania, I think the book is highly recommendable to anyone interested in travelling in Dracula's footsteps. It certainly is much more detailed than the guide that was included in Florescu and McNally's Essential Dracula some decades ago, possible the first guide of its kind.

The author fails to mention Bram Stoker's house in Chelsea, so obviously his guide can not be considered exhaustive, but perhaps he will keep expanding and revising the guide over the years to come? Still, it is reasonably priced at $20 or £10, and I am sure that many readers will be delighted by the author's enthusiastic approach to the subject.
Posted by Niels K. Petersen at 12:46

Nice to see your blog on my book. Glad you enjoyed it, and I'll certainly check out Stoker's house in Chelsea next time I'm in London.

Tourists in Romania should bring a LOT more lei than is shown on the photo - or is it supposed to be the price of the little bag of sugar? :-)