The illustration below is from a curious book called Real Cities: Modernity, Space and the Phantasmagorias of City Life (Sage Publications, 2005) by Steve Pile who is a Reader in Cultural Geography at The Open University in the United Kingdom. Pile is concerned with other aspects of a city than its buildings, streets, and traffic, but rather the city's "personality" or what he calls "the sheer expressiveness and passion of its life":

"What is real, then, about cities is as much emotional as physical, as much visible as invisible, as much slow moving as ever speeding up, as much coincidence as connection. In this light, it is best to think of this book as an exploration of urban phantasmagoric experiences, rather than as somehow laying bare the hidden 'Real' of city life. But how to do this? My approach to these questions relies on a combination of early Freudian psychoanalysis and Walter Benjamin's critical theory. This approach discloses the significance of dreams, magic, vampires and ghosts for the emotional work of city life. Dream, magic, vampires and ghosts are significant in other ways too. They reveal aspects of the lived experiences of cities, of urban social processes, and also of the spatial and temporal constitution of city life." (p. 3) 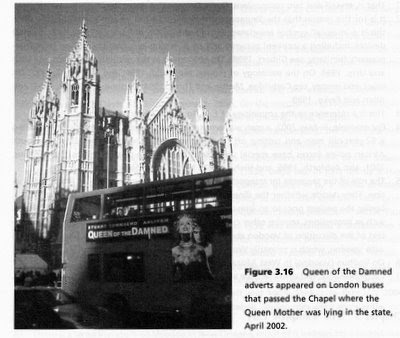 So we are obviosly far away from our usual subject of the Magia Posthuma, but Real Cities is one of those books that you might end up taking a look at when looking for literature on vampires and the Magia Posthuma. In this case you will find a chapter on "The Vampiric City in which blood flows free" dealing with the origins of the vampire in the 18th century, Stoker's Dracula, pontianaks, and the vampires of Anne Rice in New Orleans. The other chapters deal with e.g. voodoo and hauntings.

If you are interested in how far the popular mythology of vampires can be stretched to think about modern life, this could be a book for you. If you are interested in the vampire cases, you will find that the author takes most of his material on this subject from Christopher Frayling, so you will not need to go out of your way to get hold of this book.
Posted by Niels K. Petersen at 11:36 No comments:

"In 1723, a team of doctors examined corpses disinterred from a Serbian graveyard, and decided that several of them were vampires. A number of the bodies were swollen and red-faced. The corpse of one woman was 'quite complete and undecayed': her lungs, liver and spleen were as 'fresh as they would be in a healthy person,' and new fingernails had formed on one of her hands. For modern pathologists and eighteenth-century physicians alike, it appears that the facts do not speak for themselves. The physical evidence of death may not change, but what it means depends largely on the intellectual context in which it is placed."

This passage from Darren Oldridge's Strange Histories (Routledge, 2007) obviously concerns the exhumation and autopsy of the 20 year old Stana at Medvedja in 1732 (not 1723). Although it is one of only a few direct references to vampires, the book does contain a lot of material directly or indirectly relevant to anyone interested in Magia Posthuma. It is however very much a book on the role of history and the historian. Oldridge, a lecturer in history from University College Worcester, who is also known as the editor of The Witchcraft Reader, aims to show the reader how history can help to give us another view of our own beliefs and common sense. Our predecessors were, even at their most bizarre, in fact rational and common sensical in their thoughts and views of the world. But their cultural context was unlike ours, and for that reason they interpreted facts unlike we do, they asked other questions, and found their answers using the information they had.

Oldridge underscores this by analysing the arguments and thoughts that led people in the middle ages and in the renaissance to accuse people of witchcraft and to believe in the existence of revenants and werewolves. The book contains numerous examples that show how logical and very concrete the matters were dealt with by the experts of that day and age. In some cases theologians even drew conclusions that the modern day reader will agree on, but for very different reasons and with very different arguments that led to other - 'strange' - conclusions.

The reader interested in vampires and Magia Posthuma will probably enjoy Oldridge's explanation of Catholic and Protestant views on the theology of revenants. In general, the book is well written for the lay reader who has no prior knowledge of the subject. There are notes at the end of the book for anyone interested in looking more into the subject.

A month has elapsed since I bid welcome to this blog. I have deliberately done nothing to promote the blog, because I wanted to make sure there was some content before doing so. I was also curious to see if anyone would find the blog while googling for information on the subject of Magia Posthuma, but as I have received no feedback, it seems that I shall have to be patient.

Anyway, this blog has turned out to be a collection of posts about a variety of subjects that are somehow related to my interest in the vampire cases and debate of the 18th century. It is still quite exhibitionistic for me to write posts like this, because I expose both my ‘weird’ interests and my abilities and inabilities in writing English. Also, I must admit that I am cautious about giving away too many details about the subject, because I have spent long time in investigating some things, and I have other plans for making this information available. However, if I continue blogging, I will publish more facts and theories, and I hope that there are in fact people out there who are interested in filling in the lacunae!
Posted by Niels K. Petersen at 08:36 No comments: