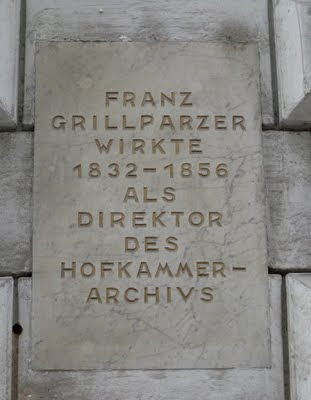 Two books on Dracula recently arrived. One is a classic biography of Vlad Tepes published and reprinted in Germany several times since 1980: Ralf-Peter Märtin's Dracula: Das Leben des Fürsten Vlad Tepes (Verlag Klaus Wagenbach), and the other is the quite new Bram Stoker's Dracula: A Documentary Journey into Vampire Country and the Dracula Phenomenon edited by Elizabeth Miller (Pegasus Books). As things have been in my life during the past weeks I have found little time to look at these two books, so here I will merely state my immediate notions.

Märtin's book is, I think, the current standard popular biography in German on Vlad Tepes, and it may in fact be the most reprinted volume on this medieval ruler. It looks very inviting and seems to be an easily read presentation of his life and the historical context, including a chapter on cruelty in the late medieval period. It is nicely illustrated and contains an updated bibliography (as of 2008) on the topic, including books on vampires.

The focus of Miller's book is, of course, Bram Stoker's novel, its genesis and its legacy. It is described as a 'documentary journey' because it is sort of an anthology or scrapbook of material that sets the background for Stoker's novel, describes in detail Stoker's work on the novel, and follows its publication history and way into popular media like theatre and movies. The portions on the historical vampire are symptomatically weak, as there are only a few pages on the Visum et Repertum, Calmet, van Swieten etc. But as Stoker himself did not have access to a lot of information on the vampires of the 18th century, and mostly knew about vampires from 19th century books in English, it is probably sufficient to the scholar or reader mainly interested in Stoker's vampire count. And there is certainly a wealth of interesting material on Stoker, his book, and fictional vampires, so this is definitely a must for anyone with an interest in 'the Dracula phenomenon', no doubt providing many hours of interesting study! 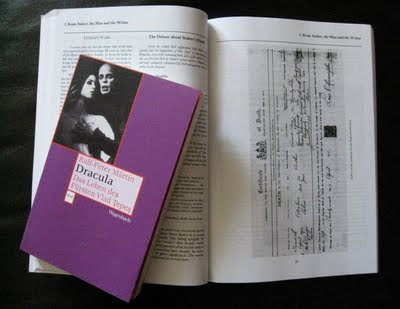 It is quite amazing how popular vampires - fictional vampires - seem to be at the moment. I just learned that a Bram Stoker Film Festival is on in Whitby in mid-October, including a 'vampire walk' of the town known from Stoker's Dracula. Well-known writer Neil Gaiman recently commented that he thought that the popularity of vampires had reached a saturation point and wished that they would go underground for a couple of decades, only to return in another and different shape.
Posted by Niels K. Petersen at 14:27 1 comment:

The Vampyre in Rome 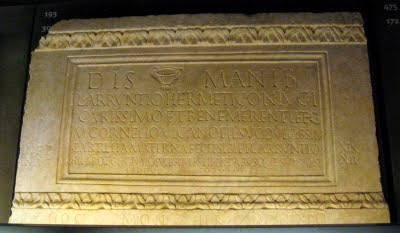 This summer I spent a few days in hot and sunny Rome. Perhaps not a place with so many connections to the subject of this blog apart from more general subjects like the way the ancient Romans treated their dead etc. This blogger, however, endeavoured to seek out a few places to report about. 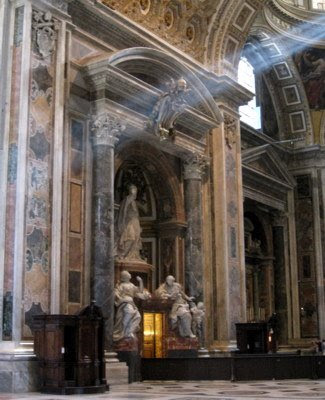 Pope Benedict XIV (Prospero Lorenzo Lambertini), was interested in the significance of post mortem signs of saints, and consequently commented on vampires in his De Servorum Dei Beatificatione et de Beatorum Canonizatione (1743) and the later addition De vanitate Vampyrorum (1752). His statue can be seen in Saint Peter's basilica, cf. the photos above and below. His name can be found in various places in Rome, e.g. at the Musei Capitolini because he purchased a number of works which are exhibited there. 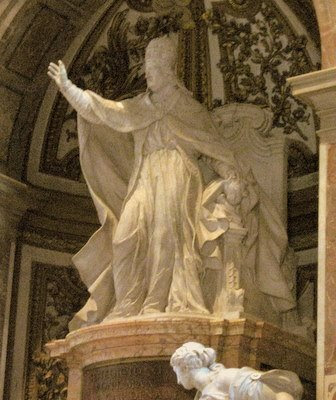 Just next to the Spanish steps you can find an 1819 copy of John William Polidori's The Vampyre! It is on display along with a well-known portrait of Polidori in a room on Lord Byron and Percy Bysshe Shelley in The Keats-Shelley House, where John Keats spent the last months of his life in a room facing the famous steps. Suffering from tuberculosis he arrived in November 1820 and died on 23rd February 1821. His grave can be seen in the non-Catholic cemetery in Rome. On display in the Keats-Shelly house is also a first edition of his Lamia, Isabella, The Eve of St. Agnes and Other Poems which had been published in July 1820. Lamia, of course, plays a role in the history of vampire fiction, cf. e.g. Twitchell's The Living Dead. 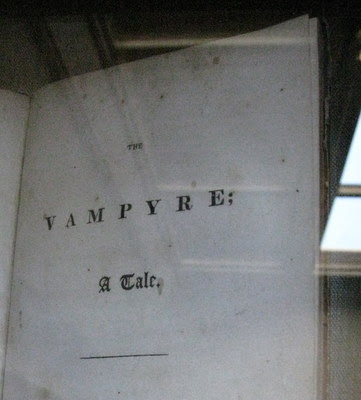 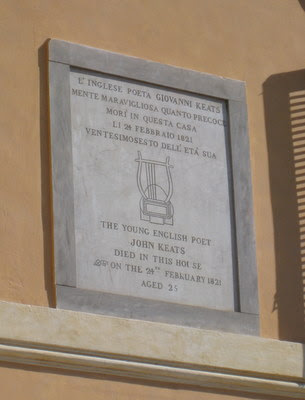 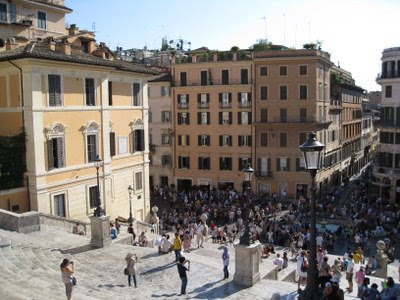 The Keats-Shelley House is seen in the photo above to the left and in the photo below to the right and it is easily recognizable because of the plaque on the facade facing the steps. Shelley actually never visited the house, but the founders of the museum wished to recognise the importance of Italy in Shelley's life and work. On display is also a portrait of Mary Shelley, and there is a bit of information on the 'haunted summer' at Villa Diodati and Frankenstein as well. There is even a portrait of Matthew 'Monk' Lewis. You can also see a library of thousands of volumes by and on Keats, Byron, Shelley and other English Romantics. 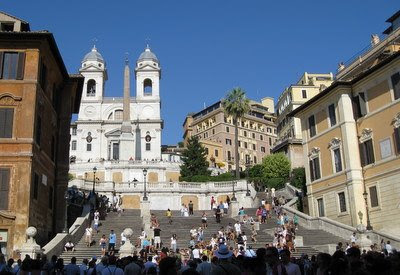 Apropos of Romantics and Gothic fiction, I once wrote about the popularity of Fuseli's nightmare paintings on e.g. book covers, and below you can see another example seen at the bookshop at the Colloseum: an Italian translation of Artemidorus' 2nd century book on dream interpretation, Oneirocritica. 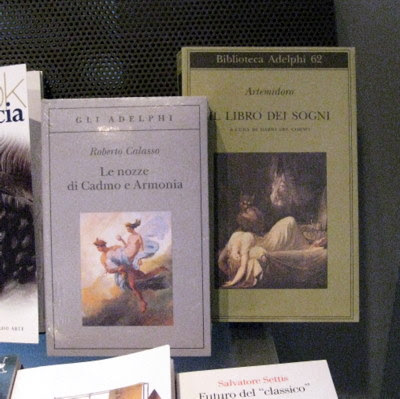 Finally, speaking of dreams and nightmares, fans of director Dario Argento's movies will go to the Profondo Rosso store and spend all their money on DVDs, books, Goblin CDs and souvenirs. The shop puslishes a few books, including one (in Italian) on Dracula and vampire movies which looked very traditional, so I refrained from buying it. I found one on Mario Bava in English, which I bought. Curiously, it is relatively easy to find Argento's movies on DVD in Rome, whereas Bava's works (which I personally find more interesting than Argento's) are hard to come by, even in the Profondo Rosso store. When I asked, I was shown but a handful of titles.

Vampire fiction is as popular in Rome as everywhere else. Stacks of Italian translations of the Twilight books, as well as dozens of other paranormal romances and vampire novels can be found in every bookshop. Non-fictional books about vampires, however, was nowhere to be found, at least I could not find any.
Posted by Niels K. Petersen at 13:27 2 comments:

Dom Calmet was interested in vampires from the beginning. In Dom Augustion Calmet: Un itinéraire intellectuel, Gilles Banderier reprints some unpublished letters that documents Calmet's interest in obtaining information on vampires. One of them is dated April 19 1732:

Calmet was interested in reading the French translation of the Visum et Repertum printed in the Glaneur, a translation sent by the French ambassador in Vienna, Bussy, to Paris in February 1732.

More on the genesis of the Dissertation can be found in another paper by Banderier, which can be found online: (Ir)rationalité des vampires? À propos du Traité sur les apparitions ... de dom Augustin Calmet, which also includes the original French text of Gerard van Swieten's text on vampires as an appendix. 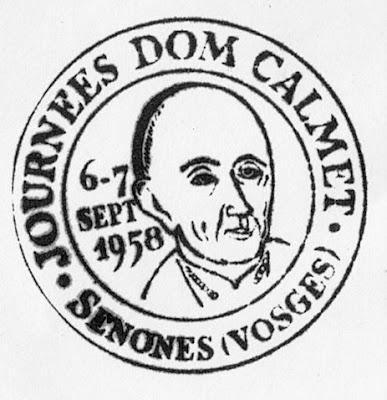 Which reminds me that I once wrote that it would be very nice and useful is someone published an annotated and critical edition of Calmet's work. The work by Banderier and others shows that there it could become a very interesting edition.

In the meantime, collectors with adequate resources may consider this third edition of the German translation of Calmet's work from 1757, at sale for $1.999.
Posted by Niels K. Petersen at 09:40 3 comments: 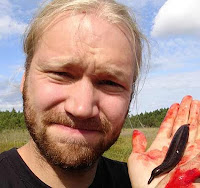 I have written a bit on the type of leeches whose Latin name, sanguisuga, was used for vampires in the 18th century as well. Their use for medicial purposes, bloodletting, is well-known. During most of August it is possible to see a bloodsucking leech in action, sucking the human blood of the TV host in a program from Swedish television. I should warn that it is in Swedish only, but also that it can be a bit unpleasant to watch, as it becomes pretty bloody when the leech stops sucking blood. But for those interested in seeing a real life bloodsucker at work, here is your chance. (The program also contains some shorter segments on other stuff, including a Swedish lady who loves sharks!)
Posted by Niels K. Petersen at 10:14 No comments: