The words of Asmundus (Asmund), when he returns from the grave of Asuithus (Asvith) in the Gesta Danorum (Deeds of the Danes), here in an English translation from 1884:

Why do you stand aghast, you who see me colourless?
For every living man fades once he is among the dead.

The tale of Asmund and Asvith is often recounted in books about vampires. Here the original Latin text can be found. The illustration below of Asmund being drawn out of Asvith's grave is one of many drawings by Louis Moe that accompanied a popular Danish translation of Saxo's chronicle originally published in 1898.

I referred to this French web site, Maison hantée, in my last post, and there's also an interview Jean Marigny, and more material on vampires. In French, of course...
Posted by Niels K. Petersen at 10:11 No comments:

I haven't been aware of this recent book by Claude Lecouteux, professor at Sorbonne and author of several books on medieval revenants and one on vampires (Histoire des vampires: Autopsie d'un mythe, 1999, also available in a German translation): La maison hantée: Histoire des Poltergeists. It was published by Editions IMAGO in September last year, and is available from various French bookstores on the internet for € 19. I suppose the format and contents are probably similar to those of the book on vampires. It's a shame that so few of his works are available in English.

There is an interview with Lecouteux (in French) here or in audio. 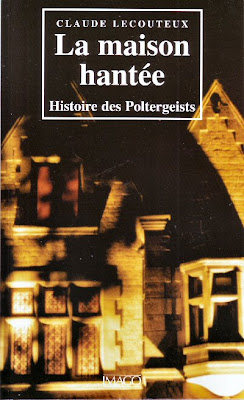 Peter Kremer, author of the magnificent and highly original study Draculas Vettern: Deutschlands vergessene Vampire (PeKaDe Verlag, 2006) (Dracula's Cousins: The forgotten vampires of Germany), informs me that he is currently working on completing the book, now using the title Draculas Vettern: Totenfurcht und Wiedergängerglaube in Deutschland (Dracula's Cousins: Fear of the dead and revenant belief in Germany). He has kindly allowed me to take a look at a draft of the book that is now well over 400 pages long, including new source material that Kremer has uncovered, and I look forward to study it. Kremer expects the new edition to be available by early summer. Certainly good news for those of us interested in the history of revenants and vampires! 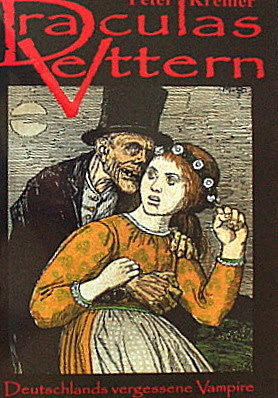 I just read a review in a Danish newspaper of Blood and Belief: The Circulation of a Symbol between Jews and Christians (University of California Press, 2007) by David Biale, Emanuel Ringelblum Professor of Jewish History at the University of California. The reviewer claims that around 1840 at the same time as new rumours concerning alleged Jewish ritual murders circulated in East Europe, people got fascinated by 'another bloodsucker': the vampire. It's claimed that Hermann Strack's Das Blut im Glauben und Aberglauben der Menschheit (1891; a scan of the 1900 edition is available for download here) particularly uncovers folklore about vampires, although in fact vampires are only briefly dealt with in the book, and then the reviewer writes (in my translation):

'The fear of vampires and Jews surprisingly have a lot in common: both allegedly have a deviant physiology, defy ordinary national limits, are seen as hypererotic and seductive creatures, are assumed to have supernatural abilities and to be accomplices of the devil, and then, of course, they both suck blood. In 1897, at the height of the new accusations of Jewish ritual murders of Christians, Bram Stoker's Dracula was published. Once again the horrifying concepts must be understood as urban legends that reveal a deep insecurity among the populace.'

Well, once again we are faced with conclusions concerning vampires that mix up fictional vampires with historical vampires. The original - historical - vampires and revenants certainly have very little in common with those described in the review, and, as readers of my blog will know, the fascination with vampires started in the 1730'ies, not in the 1840'ies.

As far as I can see from the excerpt available at Amazon, Biale does write a bit about vampires, but as I haven't had the opportunity to browse through a copy of the book, I can't say if it's the reviewer who has misunderstood Biale, or if Biale misinterpretes the history of vampires. As we know, this is unfortunately frequently the case.
Posted by Niels K. Petersen at 15:00 No comments: