Dracula is dead and well and living in Romania... 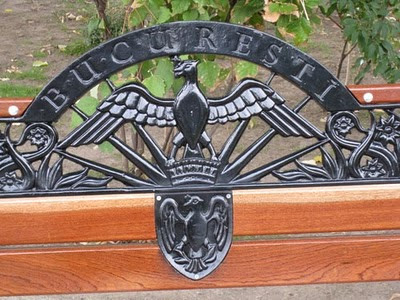 Left Copenhagen on September 23 at 11:15 AM and arrived at Henry Conanda (Otopeni) Airport, Romania, around 2:40 PM.

Like Jonathan Harker I went beyond the forests but I was travelling above them, as he or any of his modern colleagues would have done today, watching the Carpathians and the Transylvanian Alps from way up. My short visit to Bucharest, lasting just a little more than fifty hours, had one aim: to see the exhibition on Dracula and vampires at the Muzeul national de arta al Romaniei. 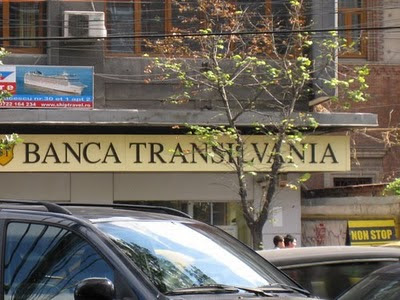 I visited the exhibition twice, but I can only show you a photo of the exterior, as photography was stricly prohibited inside. So if you want to know what the exhibition looks like, you have to go to the web site I linked to recently. I think that the exhibition was smaller than the original one at Schloss Ambras, but it was of course exciting to find on the same location famous paintings of Vlad Tepes and one of Elizabeth Bathory, as well as books and manuscripts on the subject of vampires, including Flückinger's Visum et Repertum. 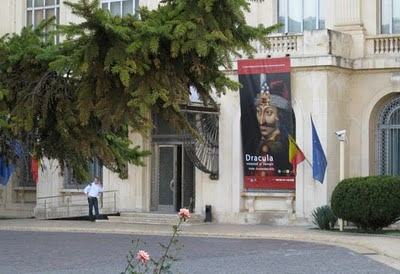 I suppose that this may well have been the first and last time that I get to see some of these items, as they are usually to be found at a number of different locations in Europe. Looking at the opening page of the Visum et Repertum, it was obvious that the spelling is Arnout Pavle and not all the other ways it has been spelled in books since that time.

I am unable to say what other people thought about these items - although I noticed a number of enthusiastic writings in the guest book - but to me it was sensational to finally see the genuine article on display to the public: the occurrences in Serbia and the following debate. Of course, the exhibition only gave a superficial impression of these things, as it follows the story from Vlad Tepes over the wars between Christian Europe and the Ottomans, the vampire cases and debate of the 18th century, ending up with Bram Stoker and the cinematic vampire. Personally, I would have liked to see some these things elaborated on in more detail, but I am more than happy to have had the opportunity to see these paintings, manuscripts, books and other items. Well worth travelling 2600 km to attend, I would say.

But this was not the only exhibition on Vlad Tepes, because at the very hotel that I stayed at I found an exhibition of stamps, letters, postcards and other items tracing the history of Vlad Tepes. 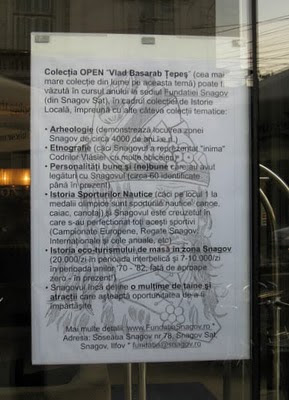 Apparently funded by Fundatia Snagov, a lot of time and effort must have gone into compiling all this material. And what a coincidence that I should find it at the very hotel I was staying at! A pleasant one as well, the Golden Tulip situated on Calea victoriei, not far from the national art museum. If you are going to Bucharest, I would recommend hotels on or near this street, as you are in a convenient part of town close to the city centre. 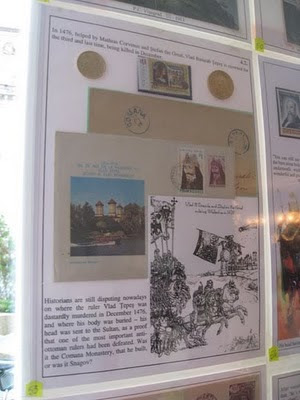 Curiously, many of the hotels and restaurants seem to think that beer from my own country is 'probably the best beer in town', so I had to go to a supermarket to taste one of their local beers. In the photo below you can also see an issue of a Romanian historical magazine, Historia with a theme on Vlad Tepes that I noticed in one of the numerous small shops selling books and magazines around town. 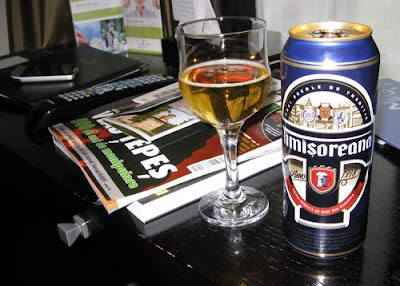 I was actually surprised to find how omnipresent Vlad Tepes/Dracula is in Bucharest. Even Bram Stoker seems to be a household name! Most of the souvenirs are pretty kitschy, but I had a pretty pleasant time at the Count Dracula Club, a theme restaurant where you can get vampiric cocktails and menus based on Dracula. So I had a 'vampire coffin' cocktail, paprika chicken and tasted their Tuica. All pretty nice and it ended with the count himself turning up, quoting Stoker and biting 'Mina' on the neck. Good fun, and not expensive. 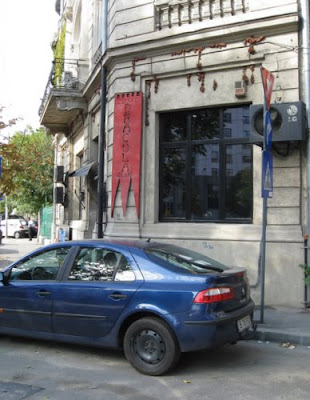 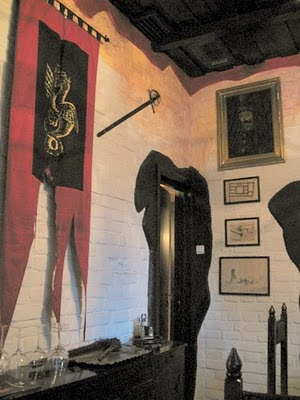 Apart from the exhibition, the other highlight of my trip was a visit to the church on an island in the lake Snagov, Lacul Snagov, where the remains of Vlad Tepes were buried according to legend. 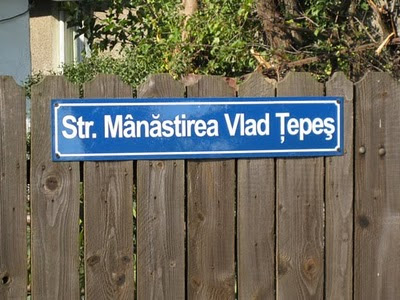 I hired a 'limousine' to there, which also allowed me to get some more information on the town and on Romania in general from the driver. Just €65 to go there and back, which is pretty reasonable for a 3 hour ride. 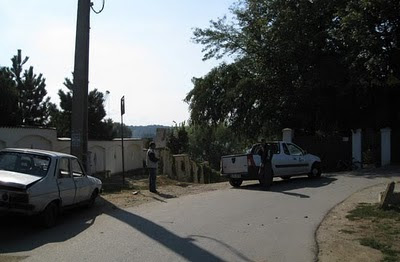 In any case, it was like entering another world when we drove off the high way and entered the forest. The road was awful, but the driver knew his way around, so everything went fine. We encountered a few horse carts and people collecting logs, everything more or less like pictures I had seen of rural Romania. 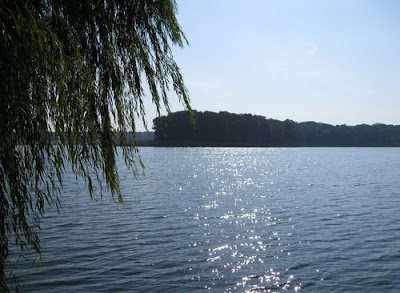 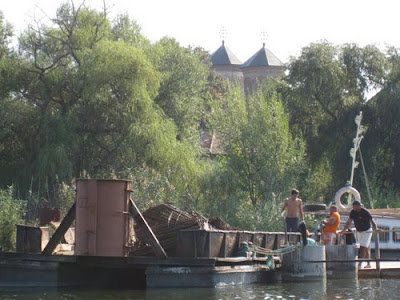 A bridge is being constructed to the island where the Snagov monastery is located, but I think it will take some time before it is finished. In the meantime you still have to go by boat to the island, and this means sailing in an old fashioned rowing boat across the lake as shown in the photo below, and no one seems to be thinking about life vests! Anyway, everything went fine, and I and my driver got to the island. I was actually the only tourist around, and I may even have been the only one that day! 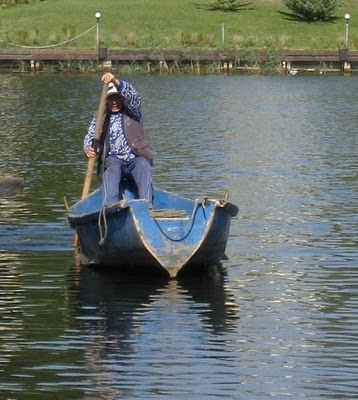 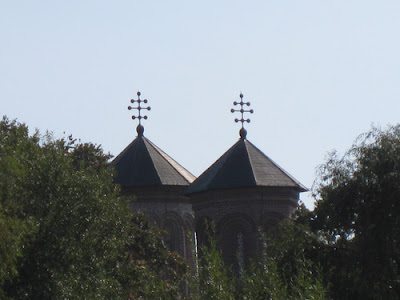 The monastery or church is pretty small like so many of the Romanian Orthodox churches. It costs 15 lei to enter and 5 lei to be rowed back and forth, which is around €2.50. Photography, unfortunately, is very expensive, €20 I think. The main attraction is the 'grave' of Vlad Tepes, which is easy to find. 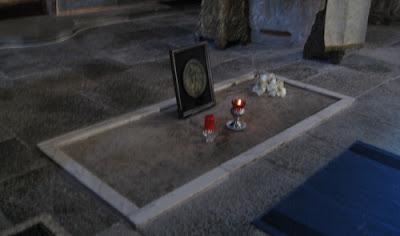 So I and my driver went around the small island, while he retold some of the stories about Vlad Tepes. Not quite historically correct, but who cares as all the circumstances surrounding this visit to a place I have read about since I was a teenager made it a highlight of a trip.

I hope to return some time in a not too distant future to 'go to the mountains', as I was recommended at the hotel, and see some of the other places I have read about, as well as the Carpathians and the Romanian countryside. But I should not wait too long, because in ten years or so Snagov and other locations may have turned into tourist traps as we know them from other countries: crowded and expensive.

The only disappointment I had was a 'standard tour' of the Parliament. The building or palace itself and the boulevard leading to it looks like the remnants of a megalomaniac vision, but I had expected more from the tour of the interiors. Anyway, this has nothing to do with vampires per se, and it did not spoil the highlights of the Dracula exhibition and Snagov! 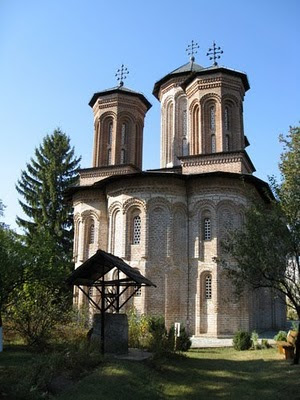 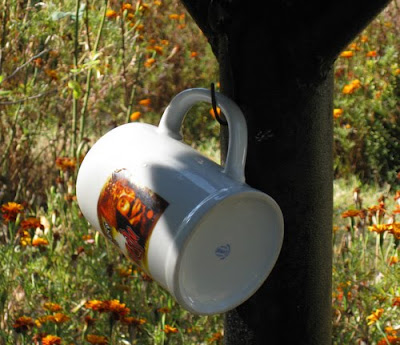 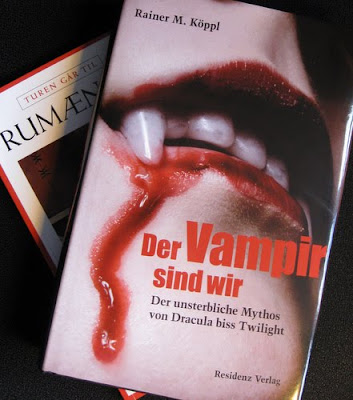 Another book on vampires arrived the other day, and I know I still need to post a review of the recent book by Florian Kührer. I hope to post more on both books soon (and I have been told even one more book on vampires should arrive shortly)...
Posted by Niels K. Petersen at 19:06 No comments:

Later this month I intend to enter the doorway shown above in a photo I have taken the liberty to 'borrow' from an interesting Romanian piece on the current exhibition on Dracula and vampires in Bucharest that I mentioned some time ago.

It will only be a brief visit to Bucharest, so I am not sure if there will be time to go to Snagov or any of the other places that the 'Dracula tourist' would go, but I am looking forward to the exhibition - more so after seeing the photos accompanying the above mentioned web site.
Posted by Niels K. Petersen at 19:49 No comments: