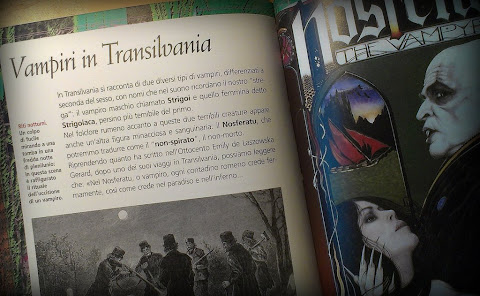 Allessandra Bisceglia's Dracula: Viaggio in Transilvania (Giunti, 2008) is a colourful companion to the Italian TV series Voyager presented by Roberto Giacobbo. The book is no doubt meant for a relatively young audience who are presented with the history of Vlad Tepes, vampires, the fictional Dracula and his cinematic incarnations. A number of photos from Romania from the making of the Voyager documentary on the subject are included.

The few pages concerning vampires are cursory and go into very little detail, although it may be worth noting that the author favours the possible translation of the word nosferatu - which in my opinion Emily Gerard hardly heard, but simply read while researching her book on Transylvania - as "non-spirato": 'il non-morto'...

'IT happened that in the midst of the dissipations attendant upon a London winter, there appeared at the various parties of the leaders of the ton a nobleman, more remarkable for his singularities, than for his rank. He gazed upon the mirth around him, as if he could not participate therein. Apparently, the light laughter of the fair only attracted his attention, that he might by a look quell it, and throw fear into those breasts where thoughtlessness reigned. Those who felt this sensation of awe, could not explain whence it arose: some attributed it to the dead grey eye, which, fixing upon the object's face, did not seem to penetrate, and at one glance to pierce through to the inward workings of the heart; but fell upon the cheek with a leaden ray that weighed upon the skin it could not pass. His peculiarities caused him to be invited to every house; all wished to see him, and those who had been accustomed to violent excitement, and now felt the weight of ennui, were pleased at having something in their presence capable of engaging their attention.'

Lord Ruthven certainly attracted the intention of not only polite society, but the public in general in the 19th century. Initially no doubt aided by the attribution of the tale to the notorious Lord Byron, the vampiric Lord and his effect on particularly women eventually took on a strange life of its own: in print, on the stage and set to music.

Much has been written about Polidori's tale, the sensation that it created and its role in developing the aristocratic vampire into Count Dracula, but I cannot recall seeing a work solely created to the subject of Lord Ruthven, until I picked up Fabio Giovannini's Lord Ruthwen il Vampiro in Italy. Ruthwen, and not Ruthven, it says, because the major part of the book consists of a translation of Charles Nodier's Lord Ruthwen ou Les Vampires published in 1820 and attributed to 'C.B.' (Cyprien Bérard). Giovannini has, however, also included a translation of Polidori's original tale, but what attracted to me the book was the 'Ruthweniana': the information about Lord Ruthwen/Ruthven's adventures in various guises and media, not only in 19th century, but also in films and comics of more recent years. And I certainly was unaware of the 'true' Lord Ruthvens: Patrick Ruthven (c. 1520-1566) and William Ruthven (d. 1541-1584), cf. also Clan Ruthven.

Giavonnini also includes bibliographic information about Polidori's The Vampyre and a colourful series of portraits of thirty of Lord Ruthwen's descendants from Sir Francis Varney and Count Dracula to Edward Cullen and Count Domingo Vrolok. Lord Ruthwen il Vampiro then no doubt will appeal both to those seeking vampire thrills and for the afficionados of the genre. Required, of course, that one can fully understand and enjoy the Italian tongue. 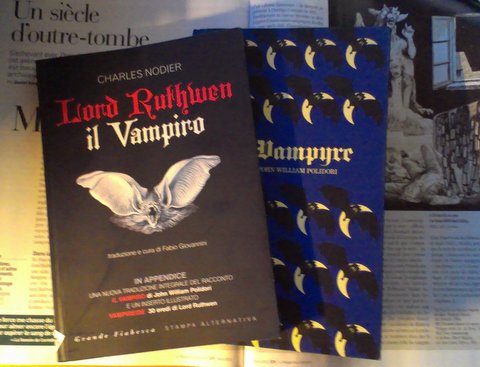 From Ovid to Fred Vargas 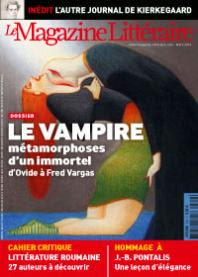 From Ovid to Vargas, the March issue of the French Le Magazine Littéraire minutely traces the metamorphoses of the vampire over more than forty, lavishly illustrated pages of articles by Claude Lecouteux, Jean Marigny, Daniel Sangsue, Jacques Sirgent and a host of other writers and scholars. Mostly concerned with the development of the fictional vampire, there is also room for historical and mythological aspects of the topic. Lecouteux writes about the vampire from Kisiljevo to Sozopol, and Maialen Berasategui outlines the 18th century vampire debate. The issue also contains a theme on Romanian authors and some extracts from Søren Kierkegaard’s recently published journals.

A thorough review of the vampiric contents can be found on vampirisme.com. 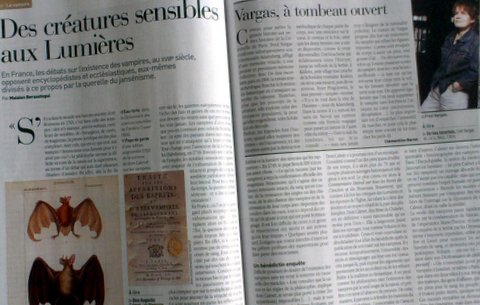 The Nightmare in Paris