The Vampire & The Voivode

My toes tend to curl when I watch a lot of the documentaries on vampires or Dracula that turn up on TV, DVD or the internet. But I can now point to a documentary that is thoroughly worth watching if you are looking for a documentary on Bram Stoker, the genesis of his novel Dracula, the locations in the novel and similar themes. I am referring to Dracula: The Vampire & The Voivode that was made in 2008, and is available on DVD for £11.99 plus p&p. It has the benefit of having Dracula expert Elizabeth Miller as script consultant, so various myths are discarded with or debunked. Furthermore, the documentary is shot on location in Dublin, Whitby, London and a number of places in Romania, and in Romania we get some insights from the late Nicolae Paduraru on both Vlad Tepes and Romanian vampire lore.

The documentary is, however, very weak on vampires per se, so this is mainly a documentary for those who want to know more about Stoker's novel.
Posted by Niels K. Petersen at 12:40 No comments:

Here is a couple of interesting books that I saw while I was in Vienna. 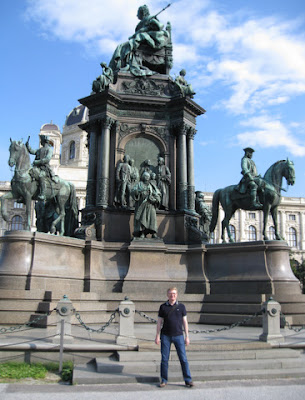 The olde blogger spent some days in Vienna this Summer. Actually, we hoped to escape the rain here in Denmark, but on the airplane I read in the Österreich that the Austrians themselves were fleeing the rain to go to Spain and Italy. Anyway, we arrived at our hotel just around the corner from the Stephansdom and Graben, and the Viennese weather was actually quite OK during most of our stay.

This time I got to visit the crypt under the Michaelerkirche, which was a creepy, but in some ways also enlightening experience. Photography was not allowed, so I must refer you to e.g. this web site for a view of the coffins and mumified corpses that are stored there. Much has happened to the human remains over the years, and we were told that the floor we were walking on top of was actually a layer of about 1,5 m of a mix of soil and human bones! Recently they have had problems with a bug (that has somehow come to Austria from New Zealand) which is devouring the old wooden coffins, so they have to cool part of the crypt to make it less attractive to the insects.

Less creepy is the Kaisergruft, where you can see the development of 'sarcophagus fashion' from Baroque, macabre ornaments to more almost plain sarcophagi, most notably in the difference from Maria Theresia to her son Joseph II. 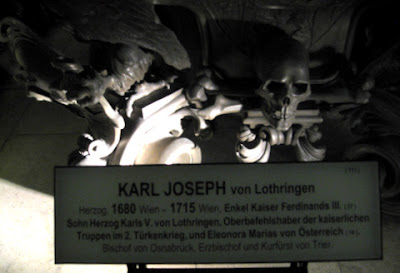 Of particular interest to the subject of posthumous magic, one finds Karl Joseph von Lothringen in the Neue Gruft. He was bishop at Olomouc from 1694 to 1711, and Karl Ferdinand von Schertz dedicated his book Magia Posthuma to him.

I had also hoped to see the burial site of Gerard van Swieten in the Augustinerkirche, but unfortunately could not get access to that part of the church when I was there. I did, however, see the so-called Kaiserstöckl where he lived from 1751 until his death in 1772. This house, which Maria Theresia built for van Swieten, is located at one of Schönbrunn's gates, in Hietzing, a yellow building which is apparently a post office these days.

Apropos of medicine, there is a nice little guide book for those interested in the subject (and this was where I read about Kaiserstöckl): Wien für Mediziner: 15 Spaziergänge durch das alte medizinisches Wien by Wolfgang Regal and Michael Nanut, and it is also available in English as Vienna: A Doctor's Guide).


The zoological gardens at Schönbrunn, Tiergarten, was a particular surprise. I have never seen so large bats before, nor have I ever stood in the midst of a lot of small bats flying all around me. This was in the rain forest house, but there were also bats in a part of the zoo simulating life at night. There is even a detailed exhibition on bats, including the vampire bat, at the Naturhistorisches Museum, and we saw a couple of bats flying around in the Stadtpark one evening. Unfortunately, there was also a great number of rats walking around in the park, although mostly under the trees and bushes.

Apart from various zoological creatures, Frankenstein and Boris Karloff turned up in an installation at the Botanical Gardens, and Vlad Tepes lent a helping hand to the crucifixion of St. Andrew in the medieval section of the Unteres Belvedere. And, of course, Fuseli's Nightmare could famously be seen in Sigmund Freud's waiting room in Berggasse. Ernest Jones, who gave Freud the Nightmare black and white reproduction, was the author of On the Nightmare which includes a chapter on vampires. Considering how influential and recognized Freud was in my own country as well as in so many other places, I was surprised to learn that Freudianism had little impact in Austria until decades after WWII. 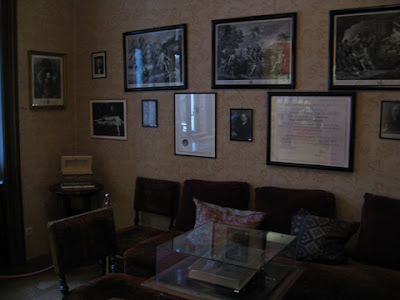 Otherwise it was a holiday not too dissimilar to that of other tourists. I saw the Hundertwasserhaus and a few other sights, and I certainly feel that I had enough Schlagobers for some time. 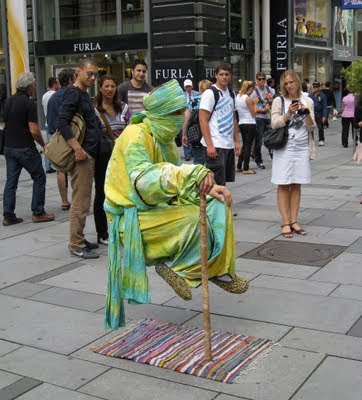 In central Vienna - as in many other large cities - a number of people try to amuse and entertain tourists and shoppers, including the guy in the photo above who appears to defy gravity. This to me shows that, perhaps, almost anything is possible in this city? Vienna is a pleasant place to stay, people are polite, and I haven't encountered any scams like the ones that you find in e.g. Rome and Paris. 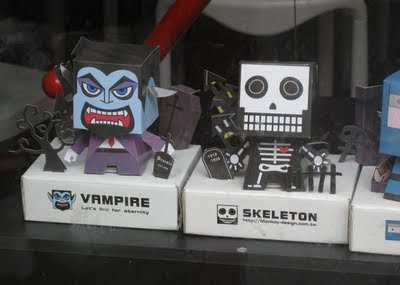