I just came across another book online worth adding to the list of selected works on the right hand of this blog: The 1732 edition of Commericum litterarium ad rei medicae scientiae naturalis published in Nuremberg, which contains the most comprehensive contemporary debate on the Serbian (or Hungarian, if you will) vampires. I referred to the journal and debate in an early blog post on Joh. Frid. Glaser's tale of horror, calling this initial report on the vampires of Medvedja 'a piece of cultural history'.

So now it is no longer necessary to go to some library to follow the journal's accumulation of information about vampires, the speculations and the reviews of books on the subject, it is right here available on Google Books - in Latin, of course, but worth a look anyway. In fact, you might start with the recensio synoptica at the beginning of the book because it contains a lengthy survey of the debate with references to where you can find various contributions. Readers of Hamberger's Mortuus non mordet will recognize the names of contributors like Geelhausen and Segner.

It is also interesting to see the context of this debate. The issue that contains Glaser's letter, from week 11 ('hebdomas undecima') begins with mentioning and commenting on what has been received by mail:  A new medical book: Lexicon medicum universale, Glaser's letter and a short notice on a medical case. Then you find reviews of two medical books, a list of causes of death in Nuremberg during February of that year, and finally a table of meteorological observations in Nuremberg during that same month.

I can recall when I, a few years back, sat in a reading room with this journal from 1732 and 1733, and noted how remarkably much is actually written on the subject of vampires in 1732, and then all of a sudden within less than a year of the publishing of Glaser's letter, the debate stops. Of course, as we know, Calmet and others resurrected the vampire as a learned subject, and corpses were still staked and burned in certain regions of Europe. But the original and fervent debate of 1732 died out relatively fast. 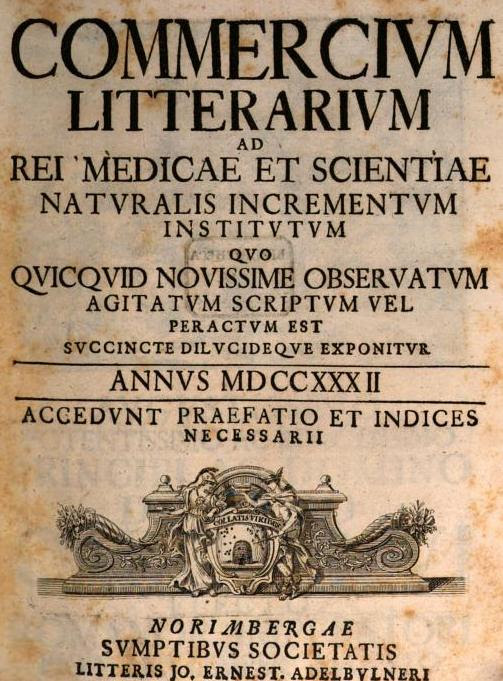