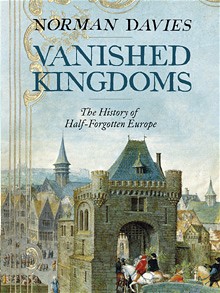 'All my life, I have been intrigued by the gap between appearances and reality. Things are never quite what they seem.' Anyone used to the popular conception of vampires who is getting interested in the historical background of the phenomenon, will probably agree. As well as is the case of many other subjects.

The fictional vampire and gothic tale to a large extent relies on a mythical landscape of names, places and concepts, in general a curious concoction of fact and fiction. Transsilvania, the German names of towns in the area, Styria etc. etc., all places that may conjure up some kind of association or picture in our imaginations, often on a background created by British or American filmmakers with only a passing knowledge of the reality behind those names.

But our concept of our past is, as Norman Davies addresses in the quote, generally biased towards understanding the past in terms of e.g. current boundaries and concepts. 'Whether consciously or not, they [authors and publishers of history books] are seeking the roots of the present, thereby putting themselves in danger of reading history backwards.' This affects what he calls 'our mental maps', which are 'thus inevitably deformed. Our brains can only form a picture from the data that circulates at any given time; and the available data is created by present-day powers, by prevailing powers and by accepted wisdom. If we continue to neglect other ares of the past, the blank spaces in our mind are reinforced, and we pile more and more knowledge into those compartments of which we are already aware. Partial knowledge becomes ever more partial, and ignorance becomes self-perpetuating.'

For someone attempting to make some sense of all the information about vampires, shroud eating corpses, posthumous magic etc., it is necessary to get at least a rudimentary understanding of the geography and history of the areas where things happened or were debated. Although living not so far from Central Europe, Moravia, Bohemia, Silesia, Galicia, or even Serbia are names whose significance in European history is rarely discussed here. And, as Norman Davies notes, it can be hard to find literature on the subject, and the focus is typically on the past hundred years or so.

So, Norman Davies' book, Vanished Kingdoms: The History of Half-forgotten Europe, recently published by Allen Lane, sounds like an interesting read. According to a review in The Telegraph,

'For anyone wanting to understand the ongoing influence which these “disappeared states” still exert on their present-day successors, there could hardly be a better place to turn than Norman Davies’s encyclopedic new book. Its author, who made his name as a historian of Poland (where his fame is not far behind that of the late Polish pope), has a broad and luminous erudition, and he uses it to shed light on whole swathes of the European past – from the early medieval Kingdom of Alt Clud (a large rock in Scotland’s Western Isles) in the far west, to Byzantium (now the western side of Istanbul), that final outpost of Europe on the Bosporus. (---)

Davies is keenly observant of how modern-day European nations choose to conduct this dialogue between these multiple pasts and the present: in particular, the way they use their institutions of collective memory – museums, monuments, memorial days – “to keep in touch with the past, and sometimes to reconstruct it systematically”.

Much can hang on the answers. Does modern-day Muslim Turkey, with an eye to future membership of the European Union, for instance, choose to “own” the period when it was the Christian capital of the Roman world? Or does it instead look to become top dog in the Muslim world, playing up its Islamic past and effectively disowning the Christian centuries before the Muslim conquest of Constantinople (now Istanbul) in 1453? Davies’s alertness to these implications makes his book a must for anyone with a serious interest in Europe’s present-day international relations.

Better still, however, is to savour this book in the manner that its length (a hefty 830 pages) and range permits. Take it with you to read the relevant chapter en route to your next European destination – whether to familiar Florence, once capital of the Napoleonic Kingdom of Etruria (now comprehensively forgotten by the Italians), or to rather less tourist-friendly Minsk. There are few better ways of coming to an understanding of the multilayered splendours and horrors of Europe’s past than through the pages of this wise, humane and unfailingly engaging book.'

The vanished kingdoms discussed in the book are: Tolosa, Alt Clud, Burgundia, Aragon, Litva, Byzantion, Borussia, Sabaudia, Galicia, Etruria, Rosenau, Tsernagora, Rusyn, Éire, and CCCP. Can you honestly say, you had heard about all of them before now?

According to The Economist: 'All across Europe ghosts will bless [Norman Davies] for telling their long-forgotten stories.' See also the review in The Independent.
Posted by Niels K. Petersen at 11:57