I have always found it strange how various 'black metal' bands take up names and quotes from all sorts of literature on e.g. vampires and posthumous magic for their band names and song titles, cf. this post. According to the Wikipedia entry on Black Metal,

'The most common and founding lyrical theme is opposition to Christianity and other organized religions. As part of this, many artists write lyrics that could be seen to promote atheism, antitheism, paganism or Satanism. The hostility of many secular or pagan black metal artists is in some way linked to the Christianization of their countries. Other oft-explored themes are depression, nihilism, misanthropy, death and other dark topics. However, over time, many black metal artists have begun to focus more on topics like the seasons (particularly winter), nature, mythology, folklore, philosophy and fantasy.'

Certainly not to my own taste in music and aesthetics, it is curious to find that sometimes searches on the internet directly lead to web sites about black metal bands. One such search concerned the phrase 'vampertione infecta', which has been used as a song title by Italian metal band Riul Doamnei. The phrase is probably mainly known to people with a special interest in Moravian magia posthuma, as it supposedly appears in an 18th century parish register of deaths in Moravia or the North East of present day Czech Republic.

At least, so Christian d'Elvert claimed when writing about vampires and posthumous magic in 1859, see e.g. Die Wiedergänger von Bärn/Mähren 1662-1740 or this recent entry on Rob Brautigam's Shroudeater site, quoting an entry from the parish register of Bärn, present day Moravsky Beroun:

In English: A.D. 1725 on February 28, Anna, the widow of the blessed Andreas Berge, deceased at the age of 48. She found no peace in the earth, Vampertione infecta, and was finally cremated.

Klaus Hamberger notes the word 'Vampertione' when commenting on the incident in his Mortuus non mordet: 'Das Fremdwort in der Eintragung zum 28. 2. 1725 verweist gleichwohl auf einen bemerkenswerten Bruch.' (p. 77) So I have always been somewhat intrigued by the term, and when I had the chance, I looked for it in the original (as shown below), and - to my eyes - there is no trace of the infection!

So, one might wonder how those two Latin words ended up among d'Elvert's otherwise reasonably reliable passages from the parish register. Just as one may wonder what 'Vampertione' was supposed to mean.

At face value this is clearly an example of the burning of a corpse suspected of posthumous magic that appears to have been relatively common in those parts during the 17th and 18th centuries. The entry in the parish register contains no description of how people determined that she should have found no rest in the grave. For that reason it seems farfetched to talk of a vampire per se. Still, as we know, the term 'vampire' was quickly linked to various kinds of revenants and (supposedly) uncorrupted corpses. For that reason, Gregor Wolny had no qualms using the term when mentioning the examples of posthumous magic in Bärn in his Die Markgraffschaft Mähren topographisch, statistisch und historisch geshildert from 1839, as shown in the excerpt at the bottom of this post.

Looking at the reproduction of the text above, even as shown here, I think you can see that there is a difference in the shade of the ink from the first to the last sentence, but the style of writing looks similar. Clearly, the last sentence was added later, as one would expect. Unfortunately, we know nothing of what happened in between, only that it apparently did not involve 'Vampertione infecta' ... 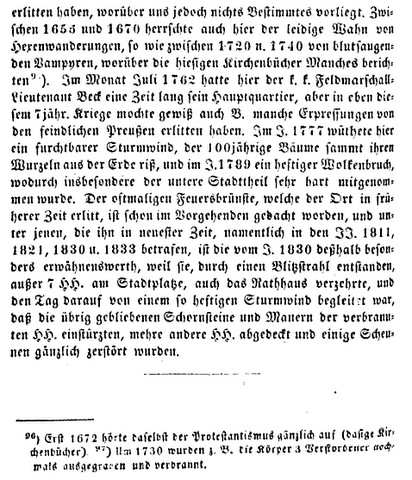 For a broader study of this urban phenomenon please read Deena Weinstein's Heavy Metal, a Cultural Sociology (http://books.google.com.gt/books/about/Heavy_metal.html?id=KinaAAAAMAAJ&redir_esc=y). Although some critics are not very satisfied with her conclusions, it is one the very few scientific approaches to Heavy Metal as a culture and Neo-Pagan response to Christian America. Recently, interviewing a local Satanist, poet and writer, I cited Joris-Karl Huysmans' Là-Bas. "Ahhh!", he said, "You are talking about a Christian, romantic, Satanism. We stand for a Neo-Pagan, atheist, one!". Needles to say he is a very devoted listener of Heavy Metal music, Death Metal in particular, and a great fan of ancient Scandinavian cultures. Thanks Neils for this post. Best wishes for next year!