A Matter of Corporeal Evidence 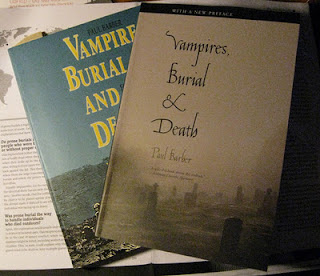 'In the 1990s, a Spanish doctor revealed that, while watching a Dracula film, he began to suspect that the lore came about from people observing the effects of rabies. It's probably only a matter of time before another doctor, watching another movie on television, reveals a connection between the vampire lore and the common cold.

Here we must insist that the movies and the media in general are not good sources of information on vampire folklore, however sound they are in the matter of aliens, crop circles and conspiracy theories. In fact, studying the vampires by watching movies is like studying the Civil War by watching Gone with the Wind, except without all the accuracy.

This observation is even truer now than it was twenty years ago, for the fictional vampire has evolved wonderfully - and this evolution is enlightening. To reacquaint myself with the fiction, I actually bought two vampire movies and watched a third on television. Well, I bought the movies at a yard sale. For fifty cents each. Still, they weren't much of a bargain. Trying to watch one of the movies reminded me of trying to read the novel it was based on. I had several false starts before I got far enough into it to state definitively that it was mining fantasies at some remove from my own. In fact, I started to understand why the average doctor, watching a vampire movie, finds himself making up wild theories in preference to following the plot.'

Paul Barber's preface to the 2010 edition of his Vampires, Burial & Death is certainly one of the more amusing texts on vampires I have read in a while.

At the same time, Barber's preface pays due to the legendary Danish archaeologist who apparently played a key role in developing Barber's interest in vampires: P. V. Glob, author of among other books, Mosefolket, translated into English as The Bog People:

'Many years ago, my wife, an archaeologist, handed me a copy of P. V. Glob's The Bog People and suggested that I might enjoy reading it. She had apparently noticed my interest in things creepy and disgusting, and Glob's book is full of such. It is an account of Iron Age corpses that, steeped in acidic bogs, had stood the test of time and emerged millennia later in remarkably good condition.'

Peter Vilhelm Glob (1911-1985) was involved in examining a number of those 'bog people', bodies found in Danish bogs, and also played an important role at two major Danish museums: Moesgård Museum (where the so-called Grauballe Man is exhibited), and the National Museum.

In his preface, Barber says that 'Glob's book has stood the test of time as well,' although one must remember that a lot has happened during the fifty years since he wrote it. In a recent Danish study of mummified bog bodies, Mumificerede moselig (Høst & Søn, 2002), historian and classical philologist Allan A. Lund dissects the various theories that have been proposed regarding the bog bodies, and it is apparent that also some of the views proposed by Glob are dubious. Barber himself adds that he 'had a few quibbles with' Glob's book:

'It was clear to me, for example, that pinning bodies down in bogs had a practical purpose that Glob seemed unaware of: left to their own devices, bodies tend to pop to the surface of watery areas, simply because, as they decompose, the gases of decomposition alter their specific gravity, turning them into something resembling a buoyant, spooky balloon. Staking them in the bog not only released these gases but physically held the bodies in place.'

Barber clearly linked these considerations to the folklore of vampires: 'What if this phenomenon was the original reason for the staking of the vampires?' Answering this question led to his influential book on vampires, and later on to co-writing a preface to a 2004 reissue of Glob's book:

'In 2004, the New York Review of Books decided to republish the very author whose book had inspired me to write this book. My wife was asked to write an introduction to The Bog People, and she agreed on the condition that we do it together. This led me to reread it. I still admire The Bog People, although now it seems almost understated and tasteful. The bog bodies, pickled in tannic and humid acid, remained quietly and decorously in place throughout their long history, whereas our vampires, always restless, took every opportunity to plague the living. They stayed out late at night, made distressing noises, stank to high heaven and beyond, and often couldn't be counted on to stay dead even after they were staked or decapitated. They didn't have superpowers, but they certainly had staying power.' 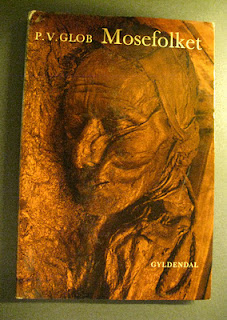 Curiously, archaeological finds have rarely been an inspiration for vampire research, as Austrian historian Hagen Schaub notes in his contribution to the vampirism conference in Vienna in 2009, Knochen und Bestattungsriten: Die Bedeutung archäologischer Funde zum Wiedergänger- bzw. Vampirglauben, although there are many relevant cases at hand in the archaeological literature:

Schaub's paper is probably the most thorough analysis of various archaeological excavations that might be interpreted as proof of beliefs in vampires or other revenants. Ultimately, he concludes that it is very uncertain if these finds can in fact be connected to revenant beliefs. The archaeological evidence can usually be interpreted in alternative ways than those relating to apotropaics, and in many cases the revenant interpretation relies on the researcher's lack of knowledge of actual revenant beliefs (as was also the case of the Spanish doctor that Barber refers to, in fact Juan Gómez-Alonso).

Recently, archaeological finds have of course been popularly connected with vampires through Matteo Borrini's discovery of a brick in a female skeleton's mouth in Venice. In some respects, we might say that this return to visum et repertum vampire and revenant research brings us full circle with Frombald, Glaser, and Flückinger's dissection of Serbian corpses. In stead of investigating old books, the vampire researchers have returned to study the corporeal remains of persons who may have been suspected of being revenants.

Still, it is difficult to interpret these corporeal remains which, fortunately, only haunt the curiosity of archaeologists and other researchers.

Caroline Arcini of Sweden's National Heritage Board recently studied about 600 cases of skeletons found buried face down, what is known as prone burials, and proposed that these burials were not accidental, but a deliberate and widespread practice of humiliating dead people for deviant deeds done while alive, cf. e.g. National Geographic's news story.

In her article in the June 2009 issue of Current Archaeology, Arcini rules out premature burial as a general explanation, and although individual burials can, perhaps, be explained as examples of e.g. revenant beliefs, she rules it out generally:

'In some cultures it is believed that individuals with supernatural abilities should be laid face down, for fear that their power could escape through the mouth. It has, for example, been adduced as an explanation for one of the 101 African slaves found buried in a 16th to 17th century cemetery in Barbados. The individual in question, a woman, had been placed on her own in the largest burial mound in the cemetery.

However, while several individuals in prone burials have their faces in the earth, the majority have the head turned to one side - in other words, in the same way as many of those who are buried supine. A similar idea is that people might be buried face down to prevent them rising to haunt the living. Both forms of explanation are plausible in relation to isolated graves, but are untenable in relation to concentrations.' (p. 32-3) 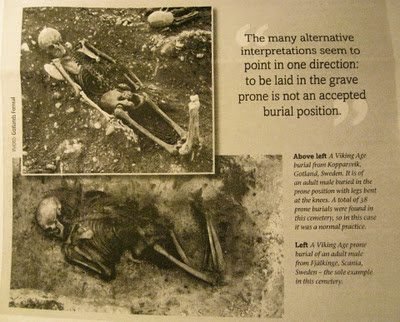 In her conclusion, Arcini says that 'the occurence of prone burials indicates that society sanctioned this apparently negative treatment of the dead. Presumably, the grieving relatives had little say in the matter; funerary customs have always been controlled by social mores.

An interesting feature of this study is the possibility of surveying, through archaeology, a form of behaviour that is deeply rooted in humankind. It appears that, whatever the religion, whatever the standards we live by or are compelled to follow, there are reactions - such as the negative response to prone burial - which are deeply rooted and universal. However, lamentable, isolating, and negative it seems to us in modern times, being buried face down is an ancient and global practice.' (p. 35) 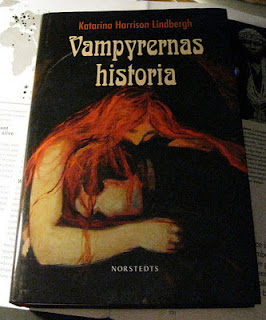 It is very hard to evaluate Arcini's view on the basis of her article only. Fellow Swede, Katarina Harrison Lindbergh, is sceptical in her recent book on vampires, Vampyrernas historia (Norstedts, 2011), as she finds Arcini's hypothesis an overinterpretation of the archaeological facts. Sweden, by the way, is the site of the remarkable find of the so-called Bocksten Man, who was 'poled' or staked in a way that all too easily would ignite the imagination of 'vampirologists'.

Archaeology, in any case, provides us with more interesting information than the theories proposed by people like Gómez-Alonso whose knowledge of 'vampires' is based on films or modern novels. However enjoyable and in other ways emotionally or intellectually stimulating such fiction can be, like Barber, 'we must insist that the movies and the media in general are not good sources of information on vampire folklore'. An issue of your local journal of archaeology, on the other hand, might perhaps be a better stimulus and inspiration.
Posted by Niels K. Petersen at 21:13