Vampyres according to an English Gentleman and a German Director

One of the most frequently quoted descriptions of vampires in English is referred to as a translation from a dissertation on vampires published in Duisburg in 1733, the only German book on vampires written and published in this part of German territory. The original translation of the description is found in an anonymous manuscript, The Travels of three Gentlemen, from Venice to Hamburgh, being the grand Tour of Germany, in the Year 1734, first published in volume IV of The Harleian Miscellany: A Collection of Scarce, Curious, and Entertaining Pamphlets and Tracts, as well in Manuscript as in Print in 1745, and continued in the subsequent volume.

When in Lubljana in Slovenia, the author mentions Valvasor: 'All persons of taste and learning in Carniola have in high esteem the piece of Baron Valvasor, intitled 'Gloria Ducatus Carniolæ,' which, they say, is wrote with the utmost truth, accuracy, and exactness.'

The landlord of the three gentlemen, 'a cheerful agreeable person, and a man of very good sense and understanding,' 'seemed to pay some regard to what Baron Valvasor has related of the Vampyres, said to infest some parts of this country'. In this connection, the author mentions a dissertation upon vampires written by the director of the gymnasium in Essen in Germany, M. Jo. Henr. Zopfius, 'from whence we shall beg leave to transcribe the following paragraph'.

This paragraph is quoted in various books and on many web sites, but it may be worthwhile to quote it in toto:

'The Vampyres, which come out of the graves in the night-time, rush upon people sleeping in their beds, suck out all their blood, and destroy them. They attack men, women, and children; sparing neither age nor sex. The people, attacked by them, complain of suffocation, and a great interception of spirits; after which, they soon expire. Some of them, being asked, at the point of death, what is the matter with them? say they suffer in the manner just related from people lately dead, or rather the spectres of those people; upon which, their bodies (from the description given of them, by the sick person,) being dug out of the graves, appear in all parts, as the nostrils, cheeks, breast, mouth, &c. turgid and full of blood. Their countenances are fresh and ruddy; and their nails, as well as hair, very much grown. And, though they have been much longer dead than many other bodies, which are perfectly putrified, notthe least mark of corruption is visible upon them. Those who are destroyed by them, after their death, become Vampyres; so that, to prevent so spreading an evil, it is found requisite to drive a stake through the dead body, from whence, on this occasion, the blood flows as if the person was alive. Sometimes the body is dug out of the grave, and burnt to ashes; upon which, all disturbances cease. The Hungarians call these spectre Pamgri, and the Servians, Vampyres; but the etymon or reason of these names is not known.'

Montague Summers quotes the passage in his 1929 The Vampire in Europe, but one year earlier, on the first page of the first chapter of The Vampire: His Kith and Kin, this is how he quotes Zopf(ius):

'Vampires issue forth from their graves in the night, attack people sleeping quitely in their beds, suck out all their blood from their bodies and destroy them. They beset men, women and children alike, sparing neither age nor sex. Those who are under the fatal malignity of their influence, complain of suffocation and a total deficiency of spirits, after which they soon expire. Some who, when at the point of death, have been asked if they can tell what is causing their decease, reply that such and such persons, lately dead, have arisen from the tomb to torment and torture them.' 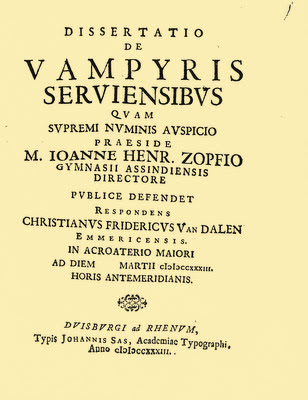 Not being satisfied with just quoting either of these English translations (or transcriptions?), I have looked up what the director of the gymnasium in Essen actually wrote. Zopf's Dissertatio de Vampyris Serviensibus consists of 27 pages written in Latin, and when you start looking for a text like the ones in English, you find that it is actually adapted from two bits of text on pp. 6-7.

On page 6, the dissertation is introduced with some comments on the word 'vampire', which includes this passage:

It is the last sentence that refers to the spectres of dead people, who come forth from their graves at the dead of night, throw themselves upon sleeping people, and leave them to die, drained of blood.

The main description of vampires and their characteristics than be found as § III on page 7:

In short, the English translations are close to the original text, but not literal. Also, if you take a look at the beginning of the previous paragraph, you can see that both the anonymous gentleman and Summers chose to omit the reference to Medvedja ('Medvedia') in Serbia.

Michael Ranft was not happy with Zopf's dissertation and his idea of a 'contagium quoddam magicum', a kind of magical contagious disease. As translated into German in Klaus Hamberger's Mortuus non mordet:

As for the three gentlemen, I have referred to the author of the manuscript as the anonymous gentleman. Aribert Schroeder in his Vampirismus: Seine Entwicklung vom Thema zum Motiv from 1973 discusses the identity of the anonymous gentleman at length and identifies three persons as possible matches: The astronomer James Bradley, the botanist Johann-Jakob Dillenius, and the physician Frank Nicholls. However, a paper from 1999 by T. Shaw, John Swinton, F.R.S., identified as the author of a 1734 travel journal, identifies the author as John Swinton, whose entry in the wikipedia succinctly says:

John Swinton (1703–1777) was a British writer, academic, Fellow of the Royal Society, Church of England clergyman and orientalist. In 1731 he was a fellow of Wadham College, Oxford, but migrated to Christ Church in 1745. He contributed to George Sale's Universal History. Swinton also contributed articles on the transcription of the 'Ruins of Palmyra'. Beginning in 1749, Swinton donated a number of Roman coins to the collection at Christ Church. From 1767 until the year of his death he was Keeper of the Archives at Oxford University.

As Schroeder remarks, the English gentleman (the Rev. John Swinton, apparently) probably could not read most of the books on vampires, because they were written in German. For that reason he referred to Zopf's dissertation in Latin, and his transcription and the later adaption by Montague Summers made Zopf a household name of vampire books and web sites in English.

Johann Heinrich Zopf himself was born in 1691 and died in 1774, and you can easily find biographical info like this, as well as a number of books by him on the internet.