Metamorphoses of the Vampire 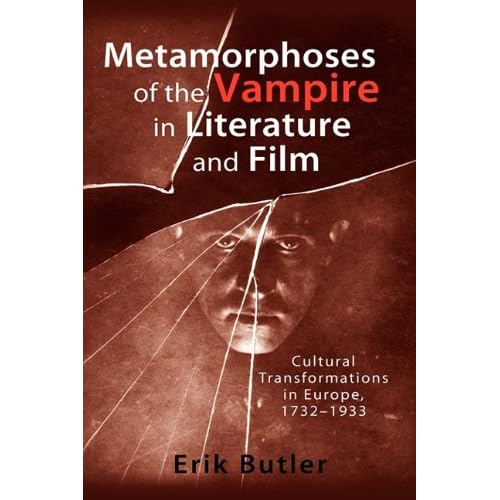 This book should be available now: Metamorphoses of the Vampire in Literature and Film: Cultural Transformations in Europe, 1732-1933 by Erik Butler, assistant professor of German Studies at Emory University, where he also teaches comparative literature and film.

'For the last three hundred years, fictions of the vampire have fed off anxieties about cultural continuity. Though commonly represented as a parasitic aggressor from without, the vampire is in fact a native of Europe, and its "metamorphoses," to quote Baudelaire, a distorted image of social transformation. Because the vampire grows strong whenever and wherever traditions weaken, its representations have multiplied with every political, economic, and technological revolution from the eighteenth century on. Today, in the age of globalization, vampire fictions are more virulent than ever, and the monster enjoys hunting grounds as vast as the international market.
Metamorphoses of the Vampire explains why representations of vampirism began in the eighteenth century, flourished in the nineteenth, and came to eclipse nearly all other forms of monstrosity in the early twentieth century. Many of the works by French and German authors discussed here have never been presented to students and scholars in the English-speaking world. While there are many excellent studies that examine Victorian vampires, the undead in cinema, contemporary vampire fictions, and the vampire in folklore, until now no work has attempted to account for the unifying logic that underlies the vampire's many and often apparently contradictory forms.'

Contents:
Introduction: Cultural Teratology
1 Vampire Country: Borders of Culture and Power in Central Europe
2 Vampires and Satire in the Enlightenment and Romanticism
3 The Bourgeois Vampire and Nineteenth-Century Identity Theft
4 Dracula: Vampiric Contagion in the Late Nineteenth Century
5 Vampirism, the Writing Cure, and Realpolitik: Daniel Paul Schreber's Memoirs of My Nervous Illness
6 Vampires in Weimar: Shades of History
7 Conclusion: The Vampire in the Americas and Beyond
8 Works Cited
9 Filmography
10 Index
Posted by Niels K. Petersen at 21:15 No comments: