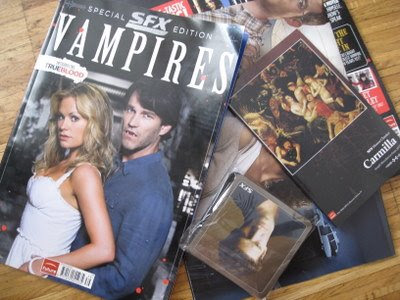 You will have to bear with me, as I have simply yet to find the time to write at more length on the conference in Vienna. In the meantime I may mention a magazine and a book that I found on my trip.

At the airport I stumbled on a special issue on vampires of the UK magazine SFX. It was pretty expensive as the Danish price is more than twice that of the original price (£7.99), but I thought I had better buy it now that I was on my way to spend a few days about vampires anyway :-)

The special issue comes with a poster, a set of Buffy coasters (!) and a book containing Le Fanu's Carmilla and Polidori's The Vampyre. The magazine itself contains mostly articles about vampire movies and TV series like True Blood and Twilight, but also Hammer's Dracula movies area featured, including a special on the making of The Legend of the Seven Golden Vampires. In a 'Top 50' of the greatest screen vampires of all time, Christopher Lee's count is only no 2, as one of the vampires (Spike) from the Buffy series is voted no 1 by readers of the magazine! There is even an interview with Elizabeth Miller on the genesis of Bram Stoker's Dracula, unfortunately marred by the interviewer's lack of knowledge of Austrian geography, as it is claimed that: 'Originally he was going to have the Count come from Astoria, not Transylvania.' In short, if you are into recent vampire fiction, you will probably find this magazine pretty entertaining. 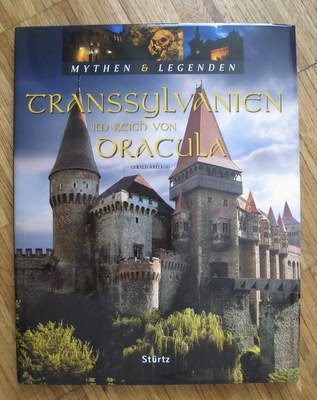 Slightly more information on vampire beliefs can be found in a new coffee table book that I bought in Vienna: Transsylvanien im Reich von Dracula by Gerald Axelrod, appropriately printed in Leipzig. The major asset of this book is a large number of remarkably gloomy photos from various places in Romania, as the text itself probably will not surprise those familiar with the subject: A biography of Vlad Tepes, a relatively short chapter on Balkan vampire beliefs and a similarly short biography of Bram Stoker with emphasis on the origins of Dracula. At the end of the book a map of South Eastern Europe even has Medwegya marked in the mid 15th century. The short list of recommended reading mentions just two books on vampire beliefs, but certainly also two of the best books written on the subject: Peter Mario Kreuter's Der Vampirglaube in Südosteuropa, and Klaus Hamberger's Mortuus non mordet. 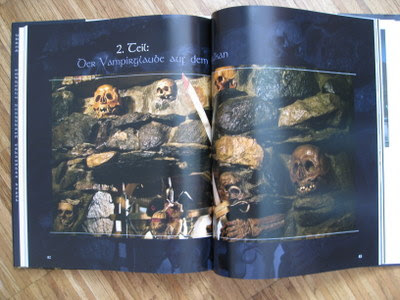 "There is even an interview with Elizabeth Miller on the genesis of Bram Stoker's Dracula, unfortunately marred by the interviewer's lack of knowledge of Austrian geography, as it is claimed that: 'Originally he was going to have the Count come from Astoria, not Transylvania.'"

Hahaha, that has to be a misprint!

Miller would definitely be familiar with the fact that Dracula was originally going to be set in Styria, formerly part of the Austro-Hungarian empire.

For example, here's an excerpt of a review of Bram Stoker's Notes for Dracula: A Facsimile Edition, which she worked on:

"The location of Count Dracula's home was apparently Germany in Stoker's earliest version of his plan. He moved the infamous castle to Styria, a province of Hungary, and thence to Transylvania, providing that otherwise little known region with worldwide fame."