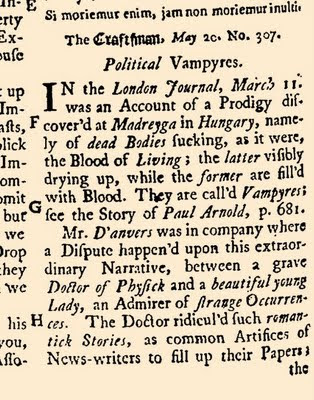 This Digital Library of 18th and 19th Century Journals contains the March 1732 issue of The Gentleman's Magazine, which on page 681 reports 'That certain dead Bodies called Vampyres, had kill'd several Persons by sucking out all their Blood.' This was not the first British magazine to mention vampires, as The London Journal did that, but that is, I think, not yet available online. The article in that journal, a shortened and corrupted version of the Visum et Repertum, led to a political debate in several journals which was documented in the May issue of The Gentleman's Magazine. Unfortunately, one of the pages of this issue seems to be unavailable at the moment (I have notified the webmaster of this error), but one can still get a flavour of this debate on e.g. 'Political Vampyres'.

'These Vampyres are said to torment and kill the Living by sucking out all their Blood; and a ravenous Minister, in this part of the World, is compared to a Leech or a Blood-sucker, and carries his Oppressions beyond the Grave, by anticipating the publick Revenues, and entailing a Perpetuity of Taxes, which must gradually drain the Body Politick of its Blood and Spirits.'

The article is reprinted in Gothic documents: A sourcebook 1700-1820 edited by E. J. Clery and Robert Miles (Manchester Univ. Press, 2000) which describes it this way:

'This item is from The Craftsman, a journal fiercely opposed to the Prime Minister Robert Walpole (father of the author of The Castle of Otranto). It rehearses the standard changes made against the Whig government, centring on financial corruption. In doing so, it incidentally displaces the opposition of credulity and scepticism with a materialist interpretation of the case reminiscent of Franco Moretti's well-known Marxist reading of Dracula. The piece could be regarded simply as an elaborate joke, but the reading of superstitious fictions as allegories of political oppression remained an option for early readers of Gothic.'

The supposed vampire Pavle of the Visum et Repertum here gets a new life of his own with a new name in a country far away from where he fell off a haywagon and died:

' Paul Arnold, who is call'd a Heyduke, was only a ministerial Tool, because it is said he had kill'd 4 Persons; whereas, if he had been a Vampyreof any Rank, we shou'd probably have heard of his Ten Thousands. It may be objected that his Body, after it had been buried 40 Days, was free from Corruption. It is the Mind, not the Body is the Author of all Wickedness; and a Man can no more carry his bad Qualities, than his Riches with him to the grave. His Corruption and the Fruits of it remains to stinck in the Nostrils of his Posteriority.'

The whole debate and the vampire's entry in English literature is minutely detailed in a chapter in another book on gothic fiction: Markman Ellis' The History of Gothic Fiction (Edinburg University Press, 2005), which I have mentioned here and here. 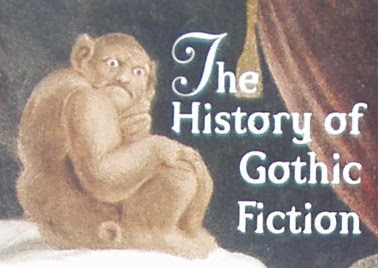 The whole thing, albeit I think a later reprint, is available on Google Books;