A friend of mine tells me that blog visitors wish to know a bit about the blogger whose texts they are reading. I can understand that, but I was initially very concerned about the reaction my blog would get: Would I get lumped in with various self-styled 'vampires' and Goths? Would I be considered another weirdo? Well, fortunately I haven't encountered any real problems, so I have slowly allowed myself to disclose a bit more about myself here, including a photo (the current one taken while awaiting food and beer to be served at Gasthaus Alte Nikolaischule in Leipzig).

My initial interest in the subject of vampires, magia posthuma etc. probably followed a course not dissimilar to that of so many others. Reading Dracula comic books as a child, I finally read Stoker's Dracula (in a Danish translation) as a teenager. That's certainly an impressionable age where you are easily fascinated, so I started reading all the books on vampires and Dracula I could find. I knew about Vlad Tepes, so I had some ambition of studying both 'the historical Dracula' and vampires in general. This was in the late Seventies, so 'source material' would be e.g. Florescu and McNally, Gabriel Ronay (whose The Dracula Myth had been translated into Danish), Anthony Masters as well as all sorts of books. I also found Sturm und Völker's anthology. My interest certainly wasn't particularly focused, I was sort of a collector of anything that had to do with vampires and Dracula. 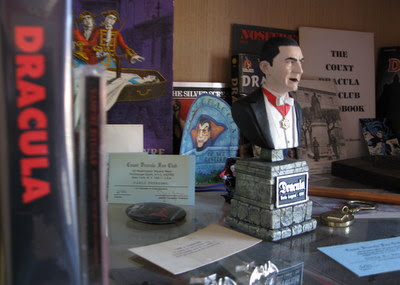 I soon realized that it would be useful to know other people with a similar interest. So I began working on a magazine (i.e. fanzine) and got into contact with a few people and got assistance from others. Consequently, we ended up organizing a 'vampire society' with its own magazine, newsletter and various meetings (the society dissolved many years ago, I should add). I also joined some of the international associations, like the British Dracula Society, the New York based Count Dracula Fan Club, and the Irish Bram Stoker Society, and even attended a walk around Stoker's and Dracula's London in the company of members of the Dracula Society in the mid Eighties. 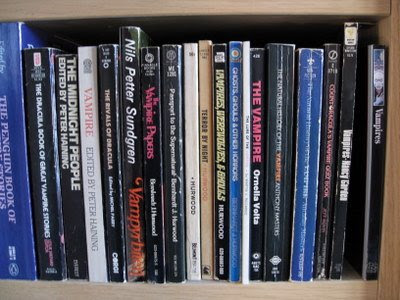 In the meantime, my search for books on the subject continued, as I was still looking for that elusive vampire book to end all vampire books, but I was never really satisfied with what I found. At one point I started going to the reading room of the Royal Library where I found obscure articles and old books like Valvasor's, the 1734 edition of Ranft's Traktat, and even Tallar's book which I had never seen mentioned in any book on the subject. I also looked at an Icelandic translation of Stoker's Dracula with a foreword that I sent to someone who had it translated into English and published.

Anyway, at this time other activities required attention. Within a few years, I was studying physics and mathematics at the University of Copenhagen, became a father, and later on I got involved in political activities. So the years passed by focusing on other pursuits. Occasionally I would purchase a new book on the subject, but for every really good book (say Paul Barber's book), there were a lot of disappointing books like Peter Haining's Dracula Centenary book.

In 2006 I felt that I had both spare time and the desire to take up the subject of vampires again, aiming at writing a popular book on vampires in Danish, more or less based on the material I already had. So I decided to spend more or less a whole week of a summer vacation from early morning to late evening on getting started on this project. Well, it spilled over to the following weeks, and most of my vacation was spent on writing and looking for information, and it just continued in whatever spare time I could find in the following months.

I soon realized that there was a lot of information I had to find, and also that I needed to get hold of some books that I hadn't been aware of, to fill in the gaps and to know the status of research in this and related fields. I was also inspired to view the subject from new points of view, requiring me to find out more about the historical and scientific context of the vampire cases and debate. 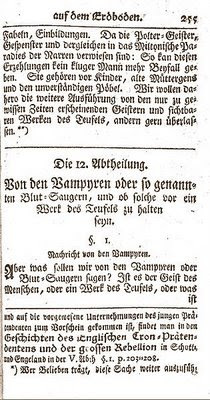 The internet played a key role here. I discovered articles containing new information, and I was able to buy books that would otherwise have been almost impossible to get. Other books like e.g. Garmann's De miraculis mortuorum were available as downloads. Still there were those elusive pieces that I couldn't find or just didn't fit. In particular, there was that curious book, Magia Posthuma, which no one seemed to have read since Calmet in the 18th century, and I was really beginning to doubt whether it had ever existed.

After some deliberation, I decided to start this blog. Perhaps someone out there could help me in my search for that book, and maybe people in the areas that I was reading about could supply me with information, perhaps even photos, from the local areas of those sites where bodies were exhumed, decapitated and burned in the 17th and 18th centuries?

I wanted to dissociate myself from other vampire web sites and blogs, so I decided to use - or perhaps brand - the term magia posthuma as the subject name, and I chose to be pretty 'serious', perhaps at times even arrogant, in attitude.

Thanks for mentioning Von denen Vampiren oder Menschensaugern the other week; I ordered a copy from Amazon.de after reading your blog and it arrived in the post yesterday. A great anthology.

Thanks for your autobiographical note. I find it very refreshing to have found your blog and you serious scientific interest in vampyres. I am a forensic and clinical psychologist and have been doing my research from the US since I first found information about clinical vampirism in Dr. von Krafft-Ebing's Psychopathiz Sexualis. I specialize in human predation and my research is based on clinical and criminal psychology.

I am looking forward to exchanging information with you and other serious researchers.