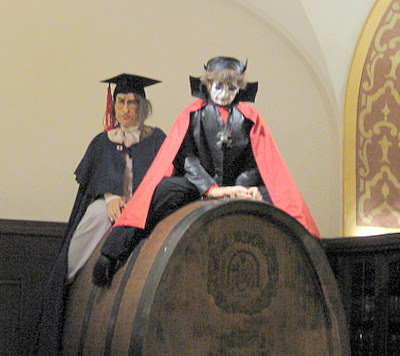 This has more to do with magia in general than magia posthuma, but one of the places you usually go when visiting Leipzig is the Auerbachs Keller, an underground restaurant that has a history going back to the 16th century. This history is connected with the Faust figure, who is said to have visited the place in the company of Mephistopheles, so the cellar is explicitly mentioned in Goethe's Faust, Goethe himself being a regular guest.

So it's a place every tourist visits, and there's a saying that if you haven't been there, you haven't been in Leipzig. Obviously they are cashing in on all of us who have read Faust and necessarily must go there. In one corner of the Keller there's a souvenir shop with all sorts of souvenirs (see one of the accompanying photos for some examples of the goods), and, well, I ended up spending a few euros there. Happily, the (traditional) food and beer isn't particularly expensive, and it's quite an informal restaurant, so there's no need to bring a tie :-) 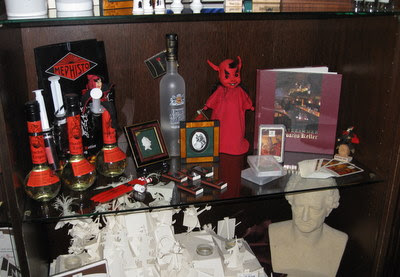 Unfortunately, the historical section was closed when I was there, but I have read that you need to reserve a table months ahead if you want to dine in that section, so keep that in mind if you plan to go there.

In the Mädlerpassage of exclusive shops overground, there's a cocktail bar called Mephisto, so you can have another drink or a cup of coffee in the company of Faust and Mephistopheles there afterwards or on another day.

No doubt some of the people involved in debating vampires in the 18th century also went there, so you can consider that when visiting the cellar and the bar. 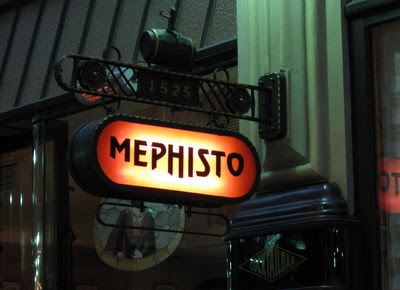 My maiden name is Posthuma.

I swear, I'm not a vampire.

I have noticed that some people are called Posthuma. A quick google search indicates that there are a number of Posthumas in the Netherlands, like Joost Posthuma. According to this web site it is a variant of Posthumus: "Dutch and North German: from a personal name given to a child born after the death of his father, from Latin postumus ‘after death’, from post ‘after’ + humus ‘grave’."