Incredibly, almost a month has passed since my last post. I hope to be more active in the future.

Anyway, I happened to switch to the History Channel last weekend and found myself watching Michael Bell in a documentary about vampires. Unfortunately, I haven't identified the title of this documentary, but it's from 2007, and the major part concerns vampires and magia posthuma in the Czech republic, featuring anthtropologist Giuseppe Maiello and archaeologist Jaroslav Spacek. You can read about both and listen to an interview in English with Maiello here. 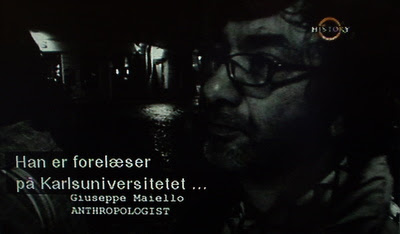 The documentary is a bit inaccurate on the sources for the interest in vampires in 18th Century Europe, but otherwise it contains some interesting insights into the Czech archaeological evidence of magia posthuma.
Posted by Niels K. Petersen at 15:45

Firstly, it's good to see you writing again.

I don't think it's one of those. The narrator on the one I saw is Eric Meyers. He narrates a National Geographic series called Naked Science, but I haven't been able to identify an episode of that show similar to the one I saw.

Good day,
we, author and journalist, are currently writing a book about vampires and are looking to contact Mr. Jaroslav Spacek. Do you know how to contact him?
Thank you very much,
Marliese Mendel

You can perhaps locate Jaroslav Spacek by contacting the the City Museum in Celakovice.