So what could this blogger be doing? Well, it would probably be too boring to mention all that has kept me busy lately, but currently I'm going through a lot of my books and papers to try and clear out what I might do without so I can get a little more room for, say, new and interesting books on the subject of posthumous magic :-) Anyway, this business has also led to a few discoveries of interesting stuff. I am particularly amazed at how many magazines (fanzines?) on vampires I have lying around, mostly from the Eighties and Nineties. And as I had come to believe that it was an error on my part to think that I had a couple of issues of International Vampire, it was very nice to find three issues. This was a magazine published by Rob Brautigam, the webmaster of the Shroudeater web site. The final issue, no 20, is shown on top of the other issues in the photo below, and was published in May 1996. I notice that my name is mentioned in that issue :-)

A few other magazines or fanzines were mentioned in a post that I wrote one year ago. 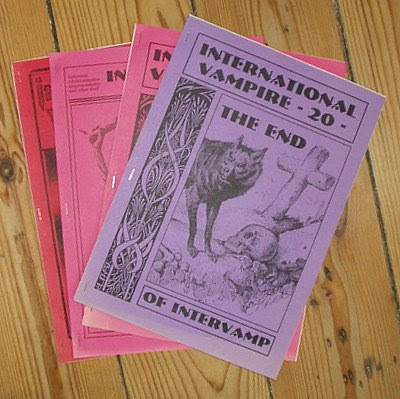