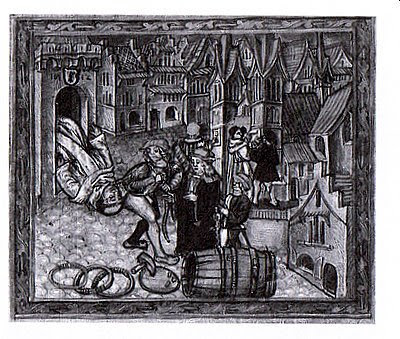 The above illustration is from the 16th Century Schilling-Kronik from Luzern in Schwitzerland and illustrates a practice used to prevent the corpses of suicides to return and haunt the living, either as a revenant or as the cause of bad weather and other calamities: The corpse - in this case that of a monk - is put in a cask and thrown into the river. The practice is known from medieval times as well as the early modern period. Unfortunately, I only have the illustration in black and white.
Posted by Niels K. Petersen at 15:16

The barrel method’s efficiency is dubious. In Shakespeare’s ”Richard III”, the two murderers employed by Richard stab Clarence, then drown him in a cask of wine, which should be as effective as sending a cask down a river. Yet he still comes back as a ghost to haunt Richard!