This year marks the 40th anniversary of the first edition of Dieter Sturm and Klaus Völker's classic anthology, Von denen Vampiren oder Menschensaugern: Dichtungen und Dokumenten, originally published by Carl Hanser Verlag. It has been reprinted and published in new editions several times, including paperbacks that only contain certain parts of the original book, making it perhaps the most bestselling anthology of vampire fact and fiction!

Certainly, Sturm and Völker's book must have been a very important book for many who have become fascinated by this curious subject. This was the book that first introduced me to the text of Flückinger's Visum et Repertum, as well as to e.g. Luther talking about the mastication of the dead in his Tischreden. I can recall struggling with reading and understanding the old German texts back in my youth, and studying the extensive bibliography. This was indeed a ground breaking and inspirational work, and the continued reprinting is a testament to the quality and scope of the work. In the light of what has been printed later on, e.g. Hamberger's anthology, Von denen Vampiren is no longer up to date, but it is still a good starting point for anyone with an interest in vampires who can read German.

Both Klaus Völker and Dieter Sturm are around 70 now and have no doubt been active in various areas during the past 40 years, but for some of us 'Sturm und Völker' is simply another way of referring to their 1968 anthology Von denen Vampiren oder Menschensaugern! 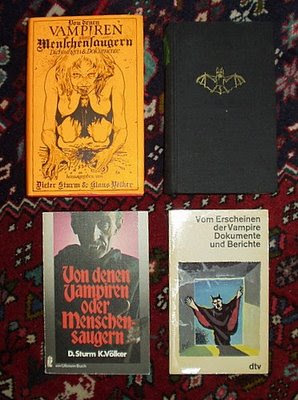