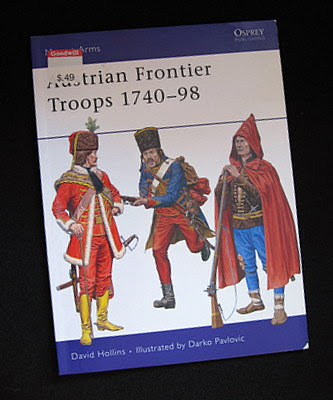 In an earlier post I quoted from a standard work on the Austrian army, but a number of other books are dedicated to this subject, e.g. a few of the books in the well-known series Men-at-arms published by Osprey. Shown above is the cover of number 413 on troops serving on the frontier zone between the Habsburg Empire and the Turks. On the right is a pandur from the Karlstadt Generalcy:

'Already active in the Turkish wars, which had concluded in 1739 with the Peace of Belgrade, these bands of local troops first appear in variations of local civilian costume. The headgear was usually a red Mütze (small round cap), recorded among the Warasdin troops in 1741, or a taller felt/sheepskin tubular hat, the Klobuk. This also often appeared outside the existing Districts as the Czakelhaube, which had a plain or sometimes decorated tail. The men wore white or blue shirts, pulled together by a wide natural leather belt, which supported pistols and knives, usually of local manufacture, and a black leather cartridge box. On top they wore a simple brown or black Gunjac jacket; sometimes sleeveless and with just a low collar, this garment was secured by cords linking the buttons on each side. The trousers, again usually white or blue, were loose-fitting in the thigh although often tight below the knee. Most preferred the local Opanken leather footwear (similar to moccasins). These reached just above the ankle, with long leather thongs securing them around the calves over thick white socks usually decorated in various colours. The more affluent wore the Hungarian Tschismen calf-length boots. Few men wore beards, but most sported a wide, thin moustache and often plaited sidelocks. Armed with Turkish muskets and long Balkan knives and, from about 1742, universally attired in the famous red cloak (the Abba-Mantel), they struck fear into European armies and civilian populations alike.'

The other two soldiers are a Hussar from the Karlstadt regiment (on the left), and a corporal from the Siebenburgen regiment, i.e. from Transylvania (in the middle).
Posted by Niels K. Petersen at 18:27