Most vampire motion pictures are expansions and variations on a popular theme that has evolved considerably since the word “vampire” originally entered the language of people around the world. On its own this is a fascinating and often quite entertaining subject, but vampire cinema generally sheds very little light on the vampire’s historical and folkloric context. Occasionally a film does however contain aspects that are of considerable interest to the historian of magia poshuma.

The 1973 Yugoslavian TV production Leptirića (Butterfly) is an example. It is set in a Balkan village in the past. A year is not specified, but as it is based on a tale called Posle devedeset godina (Ninety years later) by a Serbian author who was considered the “Serbian Gogol”, Milovan Glišić (1847-1908), more information on the context of the story is probably available in the tale. According to some web sites it concerns a Serbian vampire called Sava Savanović (Сава Сaвановић) who is associated with a water-mill (Sava’s mill, Savina vodenica). 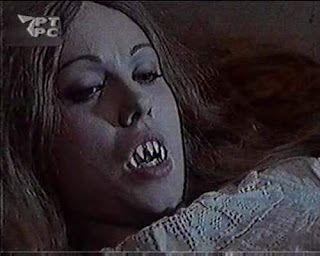 A miller is attacked by a hideous creature, and as the word “vampire” is clearly audible later on in the film, this must be a vampire. The vampire is shrouded in a dark cape which only allows us to see the vampire’s lower face that is covered with hair. The vampire’s mouth is filled with long sharp fangs that enable the vampire to suck blood from the miller’s throat.

We then follow two sets of people: On the one hand, a young, fair haired shepherdess and a young man who (as I do not understand Serbo-Croatian, I unfortunately can not understand what they are saying, but I believe this is what happens) want to get married, but the girl’s father will not allow it. On the other, a group of men, including the local Orthodox priest, who are advised by a crone to take a horse to find the vampire’s tomb. Where the horse stops, they start to dig a hole and uncover a wooden coffin. For some reason they do not open the coffin, but simply put a long stake directly into the coffin.

The girl and the young man are married, but on their wedding night the newly wed husband discovers a hole in her stomach. She then grows hair in her face and her teeth become long fangs, so obviously she is a vampire. She attacks him, and he runs off with her on his shoulders. They come to the site of the vampire’s grave, and the young man removes the stake from the coffin. A female vampire then gets out of the coffin, but is staked by the young man.

The film is interesting, because it enables us to see a vampire tale in a geographical and ethnic context that is related to that of the 18th Century vampire cases. The original tale by Glišić is probably inspired by 19th Century vampire fiction, so it is a bit hard to say how much of the tale is actually based on Balkan folklore. But I still find it profitable for an understanding of the context of the magia posthuma to watch a picture made by natives of the areas where the word “vampire” originated.

Unfortunately, Leptirića is hard to find, and seems to be mainly known in Balkan and the surrounding countries. However, its cult like reputation seems to be growing on the internet. A clip is currently available on youtube, which can give you an idea of the flavour of this tale.

Small correction: the original name in Latin alphabet is "Leptirica" - you have wrote correctly in Serbian alphabet.
The original tale is much longer and both movie and the tale are set in the first half of 19th century, after Ottoman's occupation of Serbia. You were right about plot :)
BTW, the word "vampire" is from Serbian вампир (vampir).

Does anyone know if there is an English translation of the original story?

I can find no English translation of his works in the catalog of the British Library and The Library of Congress, so I doubt that one exists.

An English translation and .srt subtitle was done by a friend and myself. You can find it now at Cinemageddon.org.

hi!
interesting lines you wrote about this movie. interesting blog too!.
now, i've just downloaded this film (for educational purposes only, doh!), and it's rather funny than dark (very funny one). So, if you or any other wants to watch it, look for it on p2p sources (emule and torrent)
it IS there, just find it and enjoy it, share it and preserve it.
the thing is, there is no dvdRip available for Leptirica, only a VHS-TVRip -or something like that-, so don't look for quality. It's only for the curious collectors like us.
Saludos desde Chile!
bye!
(sorry my english)