It is well-known that the vampire became a political metaphor almost immediately after the 1732 Medvedja case was published across Europe. Markman Ellis has described in The History of Gothic Fiction (Edinburgh University Press, 2000) how the vampire played a role in the British political debate as early as that very year, and to this day the vision of the bloodsucker or the living dead vampire still crops up in the media as a potent political metaphor. 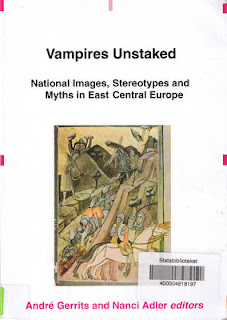 An example from academia is the published proceedings of a colloquium on “National stereotypes as Factors of Political Change in East Central Europe” that took place on 18-20 May 1994 in Amsterdam. The title of the book is Vampires Unstaked: National Images, Stereotypes and Myths in East Central Europe and it is edited by André Gerrits and Nanci Adler (Amsterdam: North-Holland, 1995). In the introduction the choice of title is explained this way:

“Robert Hayden employed the expression ‘vampires unstaked’ in his discussion on the ‘return’ of the Cetniks and the Ustasas in the Yugoslav war. The term so appropriately characterized the phenomena dealt with here that we did not hesitate to borrow it for the book’s title.”

The Cetniks (Četnici) and Ustasa (Ustaše) were nationalist organizations from respectively Serbia and Croatia, both of which fought the Communist partisans at the end of the Second World War.

In his paper, ‘The Use of National Stereotypes in the Wars in Yugoslavia’, Robert Hayden, associate professor in the Department of Antropology of the University of Pittsburgh, writes:

“The inflammatory nature of the Serb and Croat portrayals of each other as Ustasas and Cetniks received credibility by the adoption of Ustasa and Cetnik images, symbols and uniforms by some political figures in Croatia and Serbia. The fall of communist rule and the end of its suppression of these symbols and images pulled the stakes from the hearts of these fascist vampires.” (p. 213, my emphasis)

The vampire metaphor here both relates to the fascist nature of the Cetniks and Ustatas as well as to the revival of these terms. Hayden talks of “the transformation of Cetniks and Ustasas from horror story to horrible reality” (p. 215) and analyses the “symbolic geography” that plays a central part in this transformation.

We are all no doubt aware of the symbolic geography that e.g. divides Europe into a more privileged and advanced West and a poorer and possibly uncivilized East, and that creates divisions based on religion. Hayden quotes one Eugene Hammel on this subject:

“the emergence of the modern standard classification that identifies Croats with Catholicism and Serbs with Orthodoxy came only with the absolutism of the Habsburgs in the 18th Century. Ethnic classification in the Balkans is thus not strictly an endogenous process but either exogenously imposed or endogenously shaped in response to exogenous pressures.” (p. 208)

More interesting analysis of and background material for the “symbolic geography” of East Central Europe can also be found in three papers on Transylvania: ‘Transylvania: Myth and Reality. Changing Awareness of Transylvanian Identity’, ‘The Politicization of Myths: The Transylvanian Case’, and ‘Transylvania and the Great Powers: 1945-1946’.

So although Vampires Unstaked does not contain information on Magia Posthuma, it is an interesting collection of studies on how images, stereotypes and myths play an important role in shaping political events. No doubt many of us are aware of other political 'vampires' that unfortunately have become or may become unstaked in the near future.
Posted by Niels K. Petersen at 13:25