"The study of early modern European witchcraft has to a great extent been the domain of English and American scholars, and this has affected our general understanding and formulation of problems. Some of the questions in the current debate are simply wrong or have to be redefined because they were raised from an oblique, Anglo-Saxon angle." (p. 1)

Certainly, much of what has been published on vampires during the past hundred years has been dominated by English speaking authors as well. This may have been because of the success of Bram Stoker's Dracula and the subsequent adaptations in various media, but the two volumes by Montague Summers on vampires have also played a key role in establishing the route the literature on vampires has followed during several decades.

Nowadays most of the literature on vampires in the English language seems to focus on either the fictional vampire or the vampire as part of popular culture in general. The vampires of folklore and mythology are usually referred to, but even in longer treatments of the subject the course of attack generally goes along the lines set out by Montague Summers.

However, unlike Summers it is usually quite obvious that most authors and scholars from Great Britain or U.S.A. have not studied the source material in the original languages, but in many cases just copy e.g. Summers, even including his errors. One of the reasons is of course that many authors on the subject patently can not read German. Curiously enough, even if a scholar can read the original, there can be a language barrier. 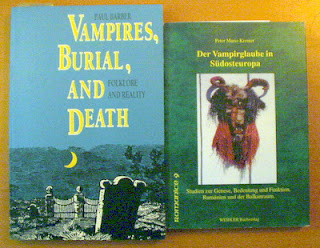 This is illustrated by reading how Paul Barber characterizes the 1732 Visum et Repertum about the vampire case at the Serbian village Medvedja in his book Vampires, Burial, and Death: Folklore and Reality (Yale Univ. Press, 1988). He writes that it is "a curious document", and continues:

“Hardly a literary masterpiece, it has seldom made its way in complete form into English-language books on the vampire, and this may be because it is difficult to translate: the language is stilted, the author is indifferent to questions of grammatical parallelism, and several versions are extant, each of which, incidentally, gives a different spelling of the author’s name, the most innovative of which (Clickstenger) is to be found in the English translation of Calmet.” (p. 15)

The opposite verdict on the text is offered by the German historian Peter Mario Kreuter in his thesis on the South East European vampire, Der Vampirglaube in Südosteuropa (Weidler Buchverlag, 2001). He writes that the report is “gut formuliert und logisch im Aufbau,” i.e.: “well formulated and logical in construction”.

So obviously the familiarity with the German language greatly affects how the two scholars view the document.

It is quite patent from many other books, that the authors have very little knowledge of the historical, geographical or ethnic context of the vampire cases. In general, in most popular works on the subject there is usually no attempt at establishing a credible connection between the vampire cases and their context, no doubt because the aim is rather to entertain and frighten than to try to understand by asking the essential questions: What happened and why?

Fortunately, a number of Continental scholars and authors are attempting to answer these questions, and with the general integration of those South and East European countries where the Magia Posthuma was observed, hopefully other barriers for our understanding are overcome. It is my hope that this blog can be of some service in this process.
Posted by Niels K. Petersen at 15:08