The rationality of the strange past 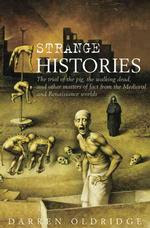 I would like to quote a few passages from the foreword and introduction to a popular book I am currently reading: Strange Histories: The trial of the pig, the walking dead, and other matters of fact from the medieval and Renaissance worlds by Darren Oldridge (Routledge, 2005). The passages express a view on understanding the rationality of people in the past that I can wholeheartedly agree with. It is a similar understanding that is my own ultimate aim in studying the subject of this blog, the Magia Posthuma:

"As historians have often noted, our failure to comprehend the beliefs of people in the past is a measure of the distance that separates us from them. It is the very strangeness of these ideas - from a modern perspective - that makes them worth looking at. If we can begin to understand why a French judge warned people about demonically possessed apples in 1602, we might start to unravel the intellectual context in which he lived." (p. ix)

"This book will argue that concepts like 'superstition' and ignorance do little to help us understand the vanished world of the witch of Rothenbach. On the contrary, they actually prevent us from seeing that world as it probably was: a community of men and women who were no less reasonable and well intentioned than we are. It is not only simplistic to view these people as hysterical: it also denies their humanity. To regard them as irrational is no less insulting - or mistaken - than to view African tribespeople as 'savages'. The idea that the pre-modern world was befogged with superstition also separates us from the past." (p. 2)

"When something appears to be strange, this often means it is outside our normal experience. It is strange to put a pig on trial, to execute a dead man, or to attempt to conjure a spirit. By the samme token, an idea may seem strange if it is unfamiliar. (---) If familiarity is one measure of strangeness, another is 'making sense'. Many strange beliefs strike us as nonsensical. It is not only unusual to acquit a suspected criminal because she can carry a hot iron for six paces; it also seems absurd. (---) 'Common-sense' judgments reflect the prevailing beliefs of particular communities, which often differ from one another. Ideas can be regarded as rational if they are consistent with prevailing knowledge. When we are familiar with the dominant assumptions of a certain culture - such as our own - we tend to regard the behaviour of people who act in conformity with these assumptions as perfectly sensible; when we have little understanding of the beliefs of another society, many of the acts that routinely occur within it may strike us as absurd." (p. 3-4)

"Can the dead walk? Most people in medieval Europe believed they could, and orthodox Christians assumed this would happen en masse at the time of the Last Judgment. Can witches fly? Even the most trenchant opponents of the persecution of witchcraft in sixteenth-century Europe believed this was possible. Just like us, the people who accepted these things relied on a body of knowledge to help them evaluate the facts of the world, and just like us, they inherited this knowledge from the culture in which they were born. Viewed in this light, the way to understand the events at Rothenbach in 1485 is to become acquainted with the cultural context in which they took place. Such episodes were not absurd. They only appear irrational today because our 'given reality' has changed." (p. 4)

I intend to return to Oldridge's book in a later blog entry.
Posted by Niels K. Petersen at 16:29