The highlight of Discovery Channel's Vampires episode in the True Horror series starring Anthony Head of Buffy fame is the material concerning an episode in a small Romanian village where a 'vampire' was exhumed and destroyed in 2003.

The corpse claimed to be a vampire (strigoi) was that of 76 year old Toma Petre who had died on December 26th 2003. After a few days some of his relatives claimed that he came to them while they slept and sucked their blood. Believing that people would die if they didn't destroy the strigoi, the relatives (of whom two, Gheorghe and Floarea Marinescu, are interviewed) exhumed the body and found blood all around its mouth. They cut up the corpse and removed the heart which they burnt at the cross roads. The ashes were mixed with water, and those who were ill drank the mixture to protect themselves against the strigoi. However, the sister of the deceased called upon the authorities, and six people were prosecuted. 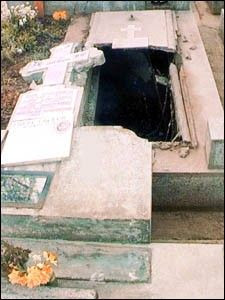 This all happened in a village called Marotinu de Sus which is located close to Celaru about 40 km south east of Craiova. According to this Romanian web site the village has 760 citizens.

The picture shown here is from a local newspaper, the Banateanul, that covered the story, but extensive live footage is shown in the True Horror documentary.

Apart from the footage from Marotinu de Sus, the documentary is a mixture of various aspects of 'vampirism', including an interview with Sean Manchester on the so-called 'Highgate Vampire' and a walk in the company of Nicolae Paduraru of the Transylvanian Society of Dracula to Vlad Tepes' fortress overlooking the river Arges. Mark Benecke from the same society demonstrates what happens to a human corpse after its death.

Some fake documents are shown in order to dramatize the tale of Peter Plogojowitz. The documents look like something from a horror film, and for some reason Anthony Head says that the exhumation of Plogojowitz occurred in 1738, i.e. 13 years later than it actually did, and he even claims that copies of the report were sent to every court in Europe. I find it pretty strange that the producers did not attempt to be more accurate in relating one of the most famous vampire cases.

The True Horror series is available on a double disc DVD, which includes the episodes on werewolves, witches and zombies.
Posted by Niels K. Petersen at 18:33