Kiss of the Butterfly 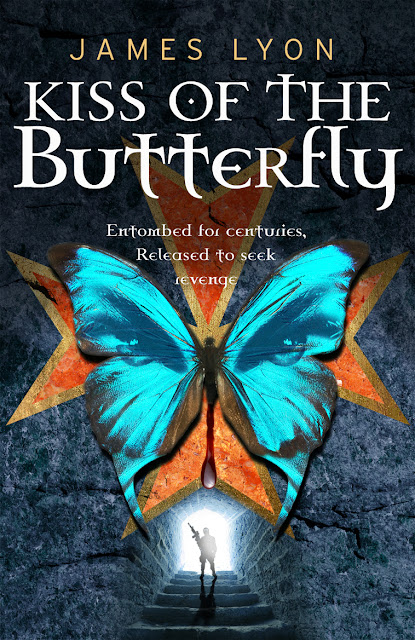 ‘Something has torn apart the once-proud Yugoslavia with ease and is feasting on it’s life essence.’

In 1991 when the Yugoslav Wars were beginning to take place, Steven Roberts, a student and teaching assistant of Professor Marko Slatina in San Diego, California, is travelling to Serbia on a mysterious ethnography grant. Steven’s scholarship involves studying a large amount of books and archival material on history, folklore and ethnography. Some of it concerns Societas Draconis, the Order of the Dragon, but most of it turns out be about vampires. Studying at the National Library in Belgrade, he e.g. reads of a vampire case on the Dalmatian island of Pasman in 1403 and of vampire investigations in Dubrovnik in the 18th century.

‘The research was tedious, and his eyes grew tired easily because of the poor lighting. Sometimes he felt he could read no more. Gradually, he uncovered small pieces of what increasingly seemed to be a much larger puzzle. Some came from historical documents, while others came from collections of folk tales recorded by ethnographers… Ducic, Novak, Zovko, Klaic, Liepopili, Karadzic … the names blurred together. Everywhere he turned he found Serbian newspaper accounts of people who were arrested and tried for opening up graves and driving stakes through the hearts of suspected vampires. He had particular problems with one 15th century document written in the Glagolithic alphabet, a precursor to Cyrillic that resembled mangled bicycles, trapezoids and triangles. It took him the better part of three days to read a two page document.’

Steven is astounded by the numerous references to vampires, and their similarities. He notes that ‘these vampires were unlike anything he had ever heard of and bore scant resemblance to film versions of Dracula,’ but the amount of material prompts him to write Professor Slatina that: ‘I suspect there might have once been some phenomenon that led to the establishments of these myths. In fact, there are days when I wonder if vampires might actually have once existed.’

Other threats are, however, more imminent than vampires. In the winter of 1991-92, the secret police in Belgrade is naturally interested in an American staying in Belgrade, and when Steven finds some interesting articles by Tihomir Djordevic on vampires, strange things happen. Apart from the well-known article from 1953, Vampir i druga bica u nasem narodnom verovanju i predanju (Vampires and other beings in our folk beliefs and traditions), ‘a veritable catalogue of vampirism, scientifically organized and categorized with instructions’, Steven discovers a rare article titled The Twelve Mighty Vampires in Legend and Fact. He asks the librarian if she can help photocopy it, but the next day the librarian is ill and replaced by another librarian who refuses to let him see the article. As Steven later learns, only 100 copies were printed, and it had been placed on a restricted list prior to publication by the Yugoslavian secret police, UDBA. 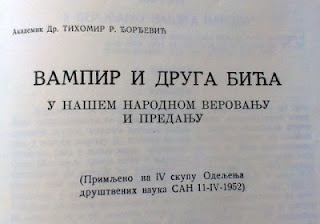 Steven, however, asks a bookseller in Sremski Karlovci, south of Novi Sad, to help him get hold of a copy, while travelling with friends to Petrovaradin and Novi Sad. At the Matica Srpska library he finds more information on vampires, in particular in the work of Stefan Novakovic, ‘the scholar who had found the original Flückinger documents about the Austrian Army vampire-hunting missions in Serbia.’ Novakovic had, apparently, found more information concerning the activities of Flückinger and other Austrians. Steven also finds information relating to the subject in the archives at the Fortress in Petrovaradin which leads him and his friends on a guided tour of the underground of that Fortress.

I am not going to disclose more of the exciting plot, but obviously Steven encounters an unexpected world in Serbia. Here evil is not an abstract term: ‘In America, if I were to talk about evil as being real they would laugh me out of the university. Yet everybody I speak with here talks of evil as if it exists and is a palpable presence.’

And the past and the present are intertwined. The novel sets out with Vlad III, Prince of Wallachia, following the Driva River upstream between Serbia and Bosnia in February 1476, heading to Srebrenica in connection with the Battle of Sabac. In 1991 Srebrenica is again to play a role in history. Vampire folklore, the Order of the Dragon, events in 18th Century Serbia and the conflict on the Balkans in the early 1990’s all become the backdrop of a conflict that transcends centuries.

A conflict that is related to the topic of Steven’s research, vampires that are in many ways very different from those Steven had heard of in California. They are shape-shifters, but typically turn into butterflies or moths, as in the Serbian folklore, the human spirit leaves the body in the form of a butterfly.

Kiss of the Butterfly is certainly an exciting read. The backdrop of Serbia on the brink of war, the minutiae of history, geography and customs, combined with a well-crafted mix of fact in fiction in the findings of Steven’s vampire research makes it a fascinating read as well. I recommend that readers have their smartphone or computer at hand when reading it, because it will prove handy to look up places and things on maps and in dictionaries while following Steven’s exploits. Eventually, you may find inspiration for future reading and travelling.

In short, I can highly recommend James Lyon’s Kiss of the Butterfly.

Kiss of the Butterfly is available as an e-book from Amazon.


James M. B. Lyon has over 30 years experience with the Balkans and the lands of former Yugoslavia: Bosnia and Herzegovina, Croatia, Kosovo, Macedonia, Montenegro, Serbia and Slovenia. Although he calls San Diego home, he has lived and studied in Boston, Florida, Germany, the Soviet Union, and England. He has a Ph.D. in Balkan History from UCLA and has lived in the Balkans for more than 18 years, during which time he has been involved in international peacekeeping efforts and Non-Governmental Organizations, and worked as a business consultant. A well-known political analyst, at present, he divides his time between Belgrade, Sarajevo and the Dalmatian coast.
Posted by Niels K. Petersen at 13:46

Greetings from Sarajevo by James Lyon, a short, but interesting text by the author of Kiss of the Butterfly:

Living in the Balkans is a bit like living in Rick's Cafe Americain in the movie Casablanca. You never know who or what will show up, from the best of the best, to the worst of the worst. And each is fascinating in his/her own way.

This creates fascinating characters for any writer, and also gives insights into why the vampire is such an appropriate metaphor for so much of the evil that occured and is still occuring. And the fact that the vampires are autotchonous to the region makes it all the better.