Mysterious manuscripts are, of course, the stuff that many a mystery or fantasy tale is made of, and here is one that might spark the imagination of an author or researcher.

The Old Bookshop of Bordentown, New Jersey, has a single sheet for sale. Dated 1709, it carries the heading: 'Sanguis/Eating of blood forbidden', this - according to the seller - 'is a piece that encourages speculation as to origin and intent.' 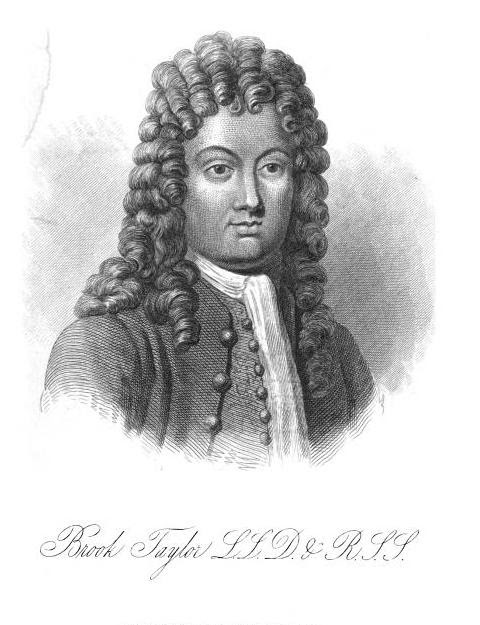 The sheet is signed by Brook Taylor (1685-1731), an English mathematician famous for Taylor's theorem as well as Taylor series, known by those (like me) who have studied mathematics or physics. Taylor, however, according to Wikipedia also wroted an unfinished treatise On the Lawfulness of Eating Blood, and the sheet for sale is probably thematically related to that.

Whether the sheet is worth spending $350 on, or whether it is of use to anyone, is hard to say, but the Old Bookshop of Bordentown finds it 'an intriguing piece with its undercurrent vampire theme, connection to a famed mathematician, and "demonic" place name.'

Wikipedia, however, mentions another unfinished treatise by Taylor, On the Jewish Sacrifices, so I am afraid that the subject of the sheet is less of a mystery, as it is probably simply a discussion of Old Testament practices? 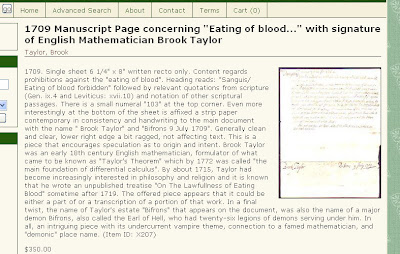 Far more expensive than Taylor's sheet is a note by Abraham Lincoln that is currently at sale here in Denmark. However, it is far less of a mystery than Taylor's manuscript, as Lincoln simply had this to say: 'I have not time to add a line intelligibly, I am terribly pressed to day. A. Lincoln. February 16, 1863.' The estimated value of this prosaic note is €4,000-5,000! But then, who knows, perhaps Lincoln was busy hunting vampires?
Posted by Niels K. Petersen at 07:00

Did an English mathematician was actually a vampire hunter? This is a very intriguing theory. Apparently was not just Lincoln who had a secret life ;) This sheet seems more enigmatic of the Voynich manuscript… What a mathematician had to do with blood eating? If you don’t mind I‘ll take your hint as a source for inspiration for a post that is growing in my mind. I’ll let you know if and when I have it posted on my blog (unfortunately it’s written in Italian, but I'll appreciate if you can come for a visit). By the way, your blog is great… full of very fascinating things that I do like to learn.

The 'eating of blood' thing was an immediate giveaway to me. After all, it echoes OT laws, i.e. 'Only be sure that thou eat not the blood: for the blood is the life; and thou mayest not eat the life with the flesh' (Deuteronomy 12:23).

The vampire angle is in the same vein as that 'Nicolas Cage' picture from the 19th century: incredibly flimsy.