The men by sword and the women buried alive 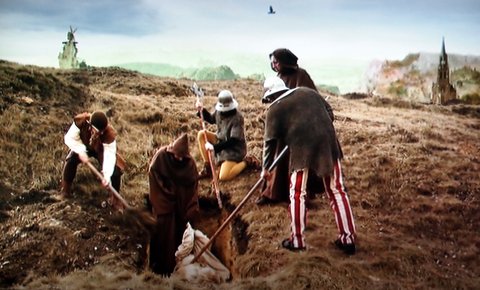 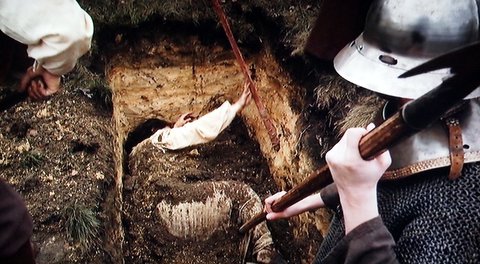 In Lech Majewski's brilliant and unique cinematic recreation and interpretation of Brueghel's famous painting The Way to Calvary (known in German as Die Kreuztragung Christi), exhibited at the Kunsthistoriches Museum in Vienna, The Mill & the Cross via Michael Francis Gibson's book Le Moulin et la Croix, a woman is executed by being buried alive.

The imagery is not explicitly based on the painting, although perhaps all the characters can be found there, so obviously this is something that could have in the context of the painting's universe. The cruelty of the Spanish rulers is patently part of the theme of the film. Dated in 1564, the painting - in Gibson's words - is set in a time which 'has come to evoke the Spanish presence signified in this painting by the double file of horsemen dressed in red.'

'Despite the efforts of Charles V, the Reformation, successfully stamped out by the Inquisition on the far side of the Pyrenees, kept gaining ground in the Netherlands. The Flemish towns had always been vigilant guardians of their prerogatives and they steadfastly resisted the King's will. By 1520, underground printing presses in Antwerp were disseminating Flemish versions of the writings of Martin Luther to the far corners of Flanders. Just before setting sail for Spain, the gloomy Philip [Phlip II, son of Charles] had entrusted the regency to his half-sister, Margaret of Parma, and being rather more devious, and not as blindly devout as is generally assumed, he gave her some final instructions at the foot of the gangway in Vlessingen. They were to be of momentous consequence: the edicts of their father in matters of heresy had all too long been neglected, he noted. From now on they were to be rigorously implemented.

But what did these plakkaten or "placards" of Charles V command?

Proclaiming heretics seditieuse personen ende perturbateurs van onsen staet ende der gemeynde ruste, "seditious persons disruptive of our State and of the common peace," they commanded that they "be put to death," te weten de mans metten sweerde ende de vrouwen gedolven: "to wit, the men by the sword and the women buried alive." These harsh decrees were ruthlessly applied - and many were put to death in the sight of their families, some by fire while others, having first been tortured, were carried to the tip of the Antwerp pier where the executioners sewed them into a leather sheath and tossed them into the sea.'

The burying alive, particularly of women, as a method of punishment and execution is known from other parts of the world as well, and it has been discussed, e.g. by Dieter Feucht, to which extent this and related practices is related to revenant beliefs. In his recent, tiny volume Vampire, Wiedergänger und Untote: Auf der Spur der lebenden Toten, Wolfgang Schwerdt notes that, taking these and other practices of execution into account, one cannot easily conclude from the state of archaeological finds to a general belief in revenants.

Burial alive, dismemberment, or - essentially the theme of the painting - crucifixion, the practices of mankind surpass the imagination of various authors and film makers of 'horror' and vampire fiction.

The Mill & the Cross is available on DVD in Germany, France and USA.