I bought a couple of books while in London. One of them being Theresa Cheung's volumionus The Element Encyclopedia of Vampires: An A-Z of the Undead (Harper Element, 2009) 'dedicated to the memory of Montague Summers'.

Curiously it refers to a number of books in German, including those by Peter Mario Kreuter and Peter Kremer, but I doubt that Cheung has actually read them, as she, unfortunately, makes a number of errors in writing the history of vampires. She e.g. refers to 'The Belgrade Vampire', 'a vampire case that took place in Belgrade, Serbia in 1732,' that 'was recorded by Dr. Herbert Mayo in his esteemed 1821 work: On the Truths Contained in Popular Superstition.' A comparison with Mayo's book shows that this 'Belgrade vampire' is in fact the Medvedja vampire case recounted in the Visum et Repertum, that Cheung writes about in an entry on 'Arnold Paole'.

She also claims that Augustin Calmet triggered 'an outbreak of panic in the Austro-Hungarian Empire. This infuriated the Empress Maria Theresa, who sent her personal physician to investigate.'. We learn that 'In 1755 the town of Olmutz in Austria was also the scene of several vampire reports, and in the region of Styria there were also two cases of reported vampire killings,' of which the last one was mentioned 'in a 1909 edition of the Occult Review.' 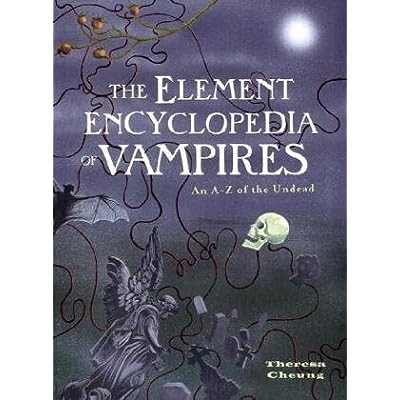 Obviously, the book is an inaccurate mix of information taken from various sources, blending fact and fiction and presenting the most fantastic subjects like 'Ethics, among Vampires':

'By any system of law every single vampire is a multiple-murderer without ethics. But if there is such a thing as a real vampire it is for all intents and purposes a different species to humans; a species that requires fresh blood, preferably human, in order to survive, and as such, a species that should perhaps be judged by its own standards. The ethics for real vampires are therefore a matter for them. However, when it comes to sanguinarians, people who have a need to drink blood, psychic vampires, people who feed on the energy or life force of others, and modern vampires, people who simply like to model their lives on the vampire lifestyle, there is without doubt a place for a code of vampire ethics.'

The book also includes a list of 'Vampire Organizations, Societies, Fan Clubs, and Websites'. This blog is not included.

Theresa Cheung apparently 'has been involved in the serious study of the psychic arts for over twenty-five years. She writes full time and is the author of a variety of books, including The Element Encyclopedia of 20,000 Dreams.' I hope that her other books are more consistent in dealing with their topics than the mix of fact and fiction that is The Element Encyclopedia of Vampires.
Posted by Niels K. Petersen at 20:54

"...recorded by Dr. Herbert Mayo in his esteemed 1821 work: On the Truths Contained in Popular Superstition."

If that is a benchmark for the rest of the work, then I certainly have my reservations in buying it.

Firstly, I'd hardly call Mayo's work "esteemed", considering how fictionalised his account was.

To be fair on Cheung, Mayo's article was held in higher regard during the 19th century because of his theory on the "death-trance" being accountable for corpses preserved in the "vampire state". Even Stoker was a fan of this notion.

Second, the work she refers to was certainly not published in 1821.

It originally took form as a series of letters for Blackwood's Edinburgh Magazine, published in 1847.

They were collated and edited in book form, in a 1849 work called Letters on the Truths Contained in Popular Superstitions.

It was published in a second and third edition called On the Truths Contained in Popular Superstitions, with an Account of Mesmerism (both 1851).