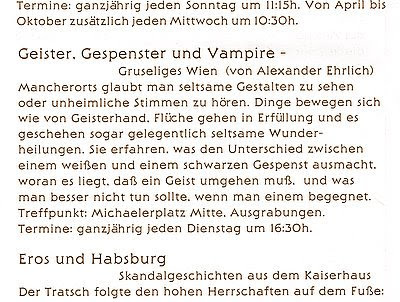 While in Vienna, I attended one of those tours of Vienna concerning ghosts and vampires that I have mentioned before. Well, it was quite entertaining and informative, although to be taken with at least a pinch of salt. It lasted for over one and a half hour and consisted of three parts, the two first concerning ghosts of either commoners or nobles, and the final one vampires. Our guide was very talkative, humorous and good at starting a dialogue with our little group of 'ghost hunters'. The language was (Austrian) German.

He claimed that about tales of about 800 vampires were known in Vienna, but that most of them were located outside the center. That was certainly news to me :-) Anyhow, one of his tales concerned an 'arch vampire' that should have been seen at Freyung, and one of the others was about Elizabeth Bathory, whose Vienna house he pointed out the location of (see the photo below). This was the place where, according to a contemporary witness, the cries of Bathory's victims were so loud that the monks living in the monastery next door had to protest. We also got a rather curious version of the story of Gerhard Van Swieten who was described as a 'vampire hunter'!

Our guide, however, probably isn't familiar with the archival documents concerning 18th century vampire cases, because we strolled past one of the archives where some of these documents are stored without any comment from him!

But it was quite entertaining and also enlightening on other aspects of Viennese history. 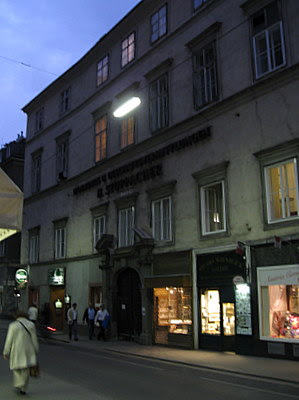