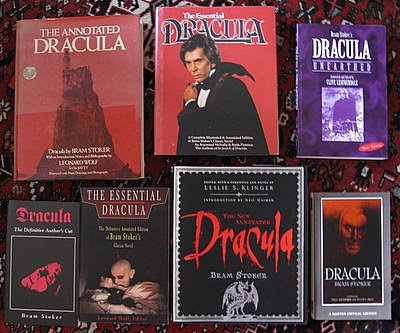 Now I have received a copy of Leslie S. Klinger's New Annotated Dracula which has been mentioned a number of times here, and what a beautiful book it is. Nicely bound, printed and illustrated, it is a joy to browse. I'm not sure when I will have time for a more detailed look at it, and as I keep saying, this blog certainly isn't about Dracula, but I think some of you might be interested in a book like this.

As I've admitted to being originally inspired by Stoker's novel to investigate the history of vampires when I was a teenager, I'll take the opportunity to show a photo of a number of annotated editions of Dracula. From top left and clockwise:

1) The first annotated edition, The Annotated Dracula by Leonard Wolf (1975)
2) Raymond McNally and Radu Florescu's The Essential Dracula (1979), that incorporated some of Stoker's own notes for the novel
3) Clive Leatherdale's Dracula Unearthed (2nd edition 2006 - the first edition was published in 1998), probably the most detailed use of Stoker's notes and sources for an annotated edition
4) Norton's Critical edition by Nina Auerbach and David J. Skal (1997), that is only sparsely annotated but includes a lot of further material
5) The New Annotated Dracula by Leslie S. Klinger (2008), which also includes information based on Stoker's manuscript
6) The second edition of Leonard Wolf's annotated edition published as The Essential Dracula (1993) - in my opinion a disappointment compared to the original edition
7) Not an annotated edition, but the shorter edition of Stoker's Dracula originally published in 1901, here published as Dracula: The Definitive Author's Cut (2005)
Posted by Niels K. Petersen at 19:07

Second, you might like to read a review of the Leslie S Klinger annotation over at Taliesin's blog.