A friend urged me to watch at least the beginning of The Third Man before going to Vienna. Of course, I've seen this cinematic masterpiece a number of times, but I watched the beginning before going to Vienna and then the whole movie after returning. It really had no impact on my experience of Vienna, and I don't feel that it has provided an extra dimension to my conception of the city, although I did recognize some of the locations when I saw the whole movie.

In Vienna I bought a book called Das blieb vom Wien Maria Theresias by Gabriele Praschl-Bichler (Leopold Stocker Verlag, 2001) which can be found in several book shops around town. In text and pictures the book recreates Vienna of the 18th century and guides one in the direction of buildings and sites that have to some extent survived from that era. Unfortunately, there is no index to guide the reader when searching for e.g. a specific person, but I think the book can be used by the tourist who wishes to get a better understanding of what Vienna was like in the century when documents concerning magia posthuma were sent to Vienna. 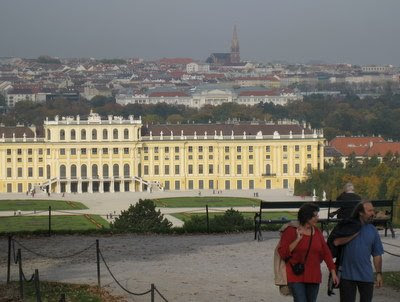