To finally continue pointing out interesting internet resources on Magia Posthuma and related subjects (here is my first post on the subject), I would like to mention the online edition of Johann Heinrich Zedler's famous Grosses vollständiges Universal-Lexicon which was published in 64 volumes in Leipzig between 1732 and 1750. The encyclopedia gives an interesting insight into many things that have a bearing on our subject of Magia Posthuma, vampires and other revenants. In fact, there is no entry on Magia posthuma, but there are several other kinds of Magia listed and explained: Magia Adamica, Magia artificialis, Magia dæmonica, Magia diabolica, Magia directa etc. Evidently this makes it possible to get some understanding of what was understand by Magia. 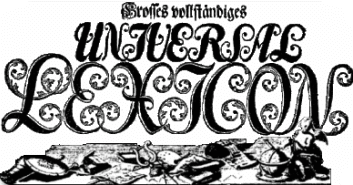 We can also read about the geography of Hungary (Ungarn), where the (changing) borders are listed along with the a list of areas that were originally ('in the days of old') part of Hungary: 'Siebenbürgen, Wallachey, Bulgarien, Thracien und Romanien, Servien, Bosnien, Dalmatien, Croatien und Sclavonien' (Transylvania, Wallachia, Bulgaria, Thracia, Romania, Serbia, Bosnia, Dalmatia, Croatia and Slavonia). In this 'old' sense of the name Hungary, the Serbian vampire cases can be attributed to Hungary, whereas it has often been pointed out that some of the vampires referred to as 'Hungarian' were not located in contemporary or modern Hungary.

And, of course, there are the long entries on vampires (Vampyren) and the mastication of the dead (Schmatzen der Toden), which according to the Zedler are closely related, although of Greek origin. Vampires are defined as ‘Todte menschliche Cörper, welche aus den Gräbern hervor spazieren, den Lebendigen das Blut aussaugen, und sie dadurch umbringen sollen.’ (Dead human bodies, which walk out of the graves and suck the blood of the living, thereby killing them). Both vampire cases from Serbia (Kisiljevo 1725 and Medvedja 1731-2) are described in detail, and various aspects of Greek Orthodox faith, Valvasor's mention of vampires/revenants etc. are related and discussed. There is even a rather detailed list of many of the 18th century works on vampires, so it is really a rather nice review that sums up a lot of what one might say about vampires in Leipzig some 10-15 years after the great vampire debate of 1732.

Furthermore, one can read a detailed bibliography of Michael Ranft (here called Ranfft), and there is the short entry on von Schertz which was shown in a previous post. In short, this is a wonderful source of information for anyone interested in the knowledge of 18th century.

Connoisseuers of the gothic will probably find it intriguing that the editor of the two first volumes of the Universal-Lexicon was Jacob August Franckenstein (1689-1733), and may consequently be interested in reading the entry about the ancient family Franckenstein or Frankenstein in volume 9.

On a more modern note, Jutta Nowosadtko who was mentioned in my previous post, has been involved in a project researching and writing about the Zedler lexicon, Zedleriana.
Posted by Niels K. Petersen at 14:35