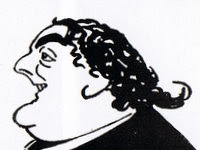 In his autobiography The Galanty Show, published posthumously in 1980, Montague Summers (1880-1948) wrote a short chapter about the reception of his books on witchcraft, vampires and werewolves. The first book, The History of Witchcraft and Demonology, was published in October 1926, and Summers claims that no less than 'a veritable bombshell exploded amid the anti-christian and nihilst rabblement':

'The edition sold out in two or three days. Within less than a week copies were at a premium. Men awoke to the danger still energizing and active in their midst. The evil which many had hardly suspected, deeming it either a mere historical question, long dead and gone, of no interest save to the antiquarian, or else altogether fabled, was shown to be very much alive, potent in politics, potent in society, corrupting the arts, a festering, leprous disease and decay. 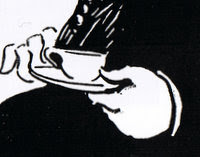 France knew the foul thing, Satanism, and so did Italy, and other countries beside, but it was, perhaps, the first time there had been in English a History of Witchcraft since the days of the learned Glanvil, the philosophic More, and of Dr Richard Boulton's Compleat History of Magick, which appeared in 1715. True, Dr F. G. Lee had raised a solemn voice during the decade 1875-1885; but the hour proved unpropitious, and his warnings were largely unheeded.

Not so in 1926. Facts were facts. The sensation was immense.

Men realized that spiritism, so vaunted, so advertised, so mysteriously attractive, so praised and tenselled by such highly placed writers as Sir Oliver Lodge and Sir Arthur Conan Doyle was nothing else than demoniality in masquerade.' (p. 156-7)

A companion volume, The Geography of Witchcraft, was published in May 1927, before he published books on 'allied themes', including his two influential volumes on vampires: The Vampire, His Kith and Kin (1928) and The Vampire in Europe (1929). Summers only has this to say in The Galanty Show:

'An angry reviewer writing in Time and Tide for January 1929 declared that in The Vampire, His Kith and Kin I had quoted Bram Stoker's romance Dracula as an authority, and that further my 'favourite evidence ... comes from Montague Summers on Withcraft (previously published), and Montague Summers on Werewolves (in preparation).' I was constrained to point out in that paper on January 18th 1929 that in the whole course of my book, 340 pages, I had only one bare reference of a couple of lines to my History of Witchcraft. In the Introduction to my The Vampire I stated (p. 13) that I was devoting a separate study to the werewolf. There is no further reference. Surely, I asked, it is a little exaggerated to describe this mention, once in the Introduction and once on page 195, of two books as 'favourite evidence'? In fact this sort of thing might not untruly be characterized as unscrupulous, the more so as I nowhere quoted Dracula as an authority, but, on the contrary, when dealing with this sensational romance in a survey of 'The Vampire in Literature' I went to some pains to point out that Bram Stoker far too recklessly availed himself of those more extravagant legends of vampirism which frankly have no place outside the stories told round a winter's heart.' (p. 158-9)

Summers later on points out that

'There is room, there always will be, for studies of witchcraft, of hauntings, of the occult. We only ask that these books should be written seriously, and with knowledge. The ignorant may posture and pose as authorities upon art, upon poetry, upon literature generally, and there is no vital mischief done. True, they lower the standards of culture and of taste. This many will consider harm enough. But there the dilettante is not playing with the eternal issues of life and death. The amateurs, and alas! there are all too many of them, who invade the occult are awaking forces of which they have no conception.' (p. 163-4)

Well, Summers certainly had a system of belief, within which the existence of e.g. witchcraft could not be denied based on arguments not unlike those of Dr. Johnson in my previous post. As he writes in The Galanty Show:

'Faith, the Bible, actual experience, all taught that witchcraft had existed and existed still. There could be and there is no sort of doubt concerning this.'

Few modern readers, if any, will agree with Summers on this point, and there is no doubt that many 'dilettantes' have attempted to write about witchcraft and the vampire from a more 'sceptical' or 'entertaining' point of view. However, this blogger too prefers that writings on the subject of e.g. Magia Posthuma are 'written seriously, and with knowledge', even if that knowledge is not - in fact: preferably not! - informed by Summers' (system of) belief which prompts him to end his chapter on Witchcraft by stating:

'The world invisible is infinite. How many there are whose sight is blindly bounded by their own horizons, the wall they have builded of the bricks of gross materialism and denial. If they but guessed what lay beyond that barrier and bourne!'

Certainly, this blogger will be content in getting the historical facts correct and trying to understanding what happened and why, in stead of trying to grasp any 'world invisible', let alone interpret the historical Magia Posthuma within a belief like that of Montague Summers!

The illustrations are fragments of a well-known cartoon of Montague Summers drawn by 'Matt' (Matthew Sandsford) and published in the Evening Standard ca. 1925.
Posted by Niels K. Petersen at 16:14