Serbian vampires and a journey along the Danube


While the Serbian documentary on vampires I posted about last year has been removed from youtube, here is a video from Radio Television Vojvodine about, as far as can I gather, a specific vampire incident in Radojevo. However, readers more familiar with the language are welcome to supply more exact information.

As for Serbia, here are a couple of extracts from Servia and the Servians by the Reverend William Denton, published in 1862. The book contain Denton's observations from a journey along the Danube. In Northern Serbia, Denton one evening 'strolled to the village of Dobra about a mile and a half to the west of the place where our boat had been moored for the night':

'The way to the village led past two small cemeteries, one apparently deserted, and both of them at least half a mile from any houses. The little village cemeteries of Servia are less squalid and forlorn looking than similar ones in France and Germany, but they lack the neat appearance and the shade and repose of an English churchyard. The entrance lies through what is known in England by the name of a lych gate. Such gates, however, as with us are only seen at the entrance of a churchyard, are in Servia common not only to cemeteries, but also to private houses> the piece of shingle roofing being absolutely necessary for the protection of the wood work of the gate from the effect of the sun. In the centre of the first cemetery which I entered stands a square piece of cob-wall with a shingle roof, but whether tool-house or chapel it was impossible to determine. One or two dry twigs stuck at the head of some of the grass evidenced an attempt at planting a tree, which seemed to have failed from want of water. The tombstones were of very singular forms, but scarcely any could be met with older than the time of the War of Independence. Over the little mounds of earth and in and out of the graves sported large green lizards, besides troops of small brown ones. In no place are so many lizards found as in these cemeteries; the dry hillocks of earth which rise over the graves, and the uninterrupted quiet which reigns around makes the abodes of the dead a favourite retreat for these beautiful beings. Eastern fables represent the spirit of man under the shape of a lizard: and the reason for so doing seemed clear enough, as I looked on the number of these reptiles sporting around the graves or lying basking in the rays of the sun on the top of a tombstone.' (p. 110-1) 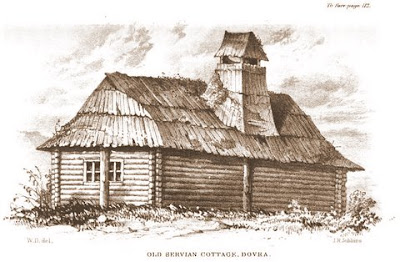 'A drive of about an hour and a half brought us to the village of Medvedje, where we found the parish priest the service in the church having been over more than two hours before seated under the far projecting roof of a little tavern, and engaged in explaining to his flock the provisions of a bill, as we should call it, then before the Skoupschina, or Servian Parliament, for an alteration in the law of assessment to the public service. The main feature of the new bill was, that it proposed to lighten the amount of taxes to be paid by the classes which had been hitherto the sole contributors to the revenue of the country; but by enlarging the area of taxation to maintain, or perhaps to increase, the whole sum received by the Treasury. In order that the wishes and sentiments of the people should be made known, the Government had directed the various parish priests throughout the country to assemble their parishioners, and invite a discussion on the proposed alteration. When we drove up to the inn-door, the pastor or pope of Medvedje was engaged in reading the proposed enactments clause by clause. An animated and very creditably conducted debate on the part of the people then ensued, and the opinions of the village parliament appeared to be much divided as to the prospective advantages of the new bill. On the whole, however, it seemed to me that the proposed scheme of the Ministry of Prince Michel was regarded with disfavour by the majority of the community. At least, the villagers of Medvedje, which probably comprised a larger proportion than some other districts of hitherto non-paying members, were not disposed to acquiesce in the alteration of the law, which would deprive them for the future of exemption from taxation. Of course, it is impossible to please those who feel the constant pressure of a direct tax, but it must be owned that the temper and ability with which the bill was discussed by the Medvedjean Parliament was very creditable to them, and might advantageously be imitated in larger popular assemblies.

Though the village of Medvedje does not, so far as I know, appear in any map - at any rate it is not marked in Kiepert's map, which I carried with me - it lies about equal distances from Swilainatz and the monastery of Manassia, on the cross road which leads to towns and villages in four different directions. The village itself seems to have grown out of the necessities of such a position, and consists largely of small taverns and eating houses, mingled with the homes of labourers and small cottage proprietors. For their needs a church was just about to be erected. The ground had been cleared, and the stone for building had been collected and brought to the spot, by the various inhabitants, and a small assessment on real property would soon supply the means for paying the workmen. Judging from what I saw in the course of my rambles, there must be a considerable amount of church building going on in Servia. My travelling led me through thinly peopled and rural districts more than through towns and amongst a concentrated population; yet merely taking account of those which were building by the road-side, there seemed to be every disposition on the part of the people to supply themselves with churches adequate to the population. Indeed, a monk with whom I had an interesting conversation on the state of the Church in Servia, whilst lamenting that so many persons neglected the service of the Church, yet added, what might well be the confession of other priests than those of this country, "The people are ready enough to build churches and are willing to die for their religion at any time, but it is not so easy to get them to come to church." There is great truth, no doubt, in these words; but the difficulty, as I assured the monk, was not altogether and solely a Servian one. In the present case it may perhaps be a satisfaction to sermon-writers to know that the disinclination does not arise either from the length or the quality of the sermons as people are but little troubled with preaching in the orthodox Church - at any rate in this part of it.' (p. 188-90)
Posted by Niels K. Petersen at 10:28