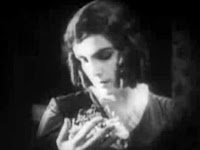 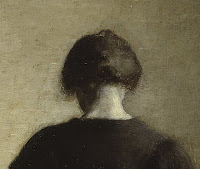 'Is this your wife? What a lovely throat!' says the Count in Murnau's Nosferatu (here in this English language version of the script).

I was reminded of this complimentary remark when I saw a documentary video on Danish painter Vilhelm Hammershøi (1864-1916) as part of an exhibition on Hammershøi and Europe at the National Gallery of Denmark. A number of Hammershøi's paintings from the late 19th and early 20th century show a woman in an austere apartment, usually from the back or the side, leaving her face unseen. In the documentary, one of the curators of the exhibition opines that Hammershøi this way indulges in the beauty of the female neck, and that other painters did the same during that period. Well, personally I think that at best this would be a secondary feature of these paintings. Anyhow, Count Orlok certainly had an eye for a beautiful neck, in this case that of Ellen Hutter portrayed by Greta Schröder.


'Einen schönen Hals hat Eure Frau...' is also the title of a new score to Murnau's film composed by Stephan v. Bothmer and performed live in a numbere of places this year, cf. the video below.


Finally, I should mention that the similarities between Hammershøi's paintings and those of other European artists which is a fundamental premise of the current exhibition has been criticised in Danish media, including another feature that may interest some of this blog's readers: A handful of paintings of empty rooms by Hammershøi and De Deuren (The Doors) by Xavier Mellery. Mellery's painting, apparently, is understood in term of Freud's Das Unheimliche, which in this context is translated not as usually: The Uncanny, but more literally as The Non-homely:

The non-homely is of course entirely wrong given the fact that Freud explicitly tells us in "Das Unheimliche" that this is only a misconception and the uncanny is merely a sub-division within the familiar or Heimliche, right?

I believe you are quite right. Thanks for your comment.