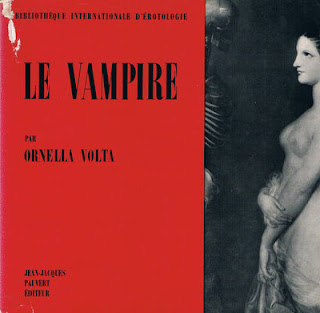 Those of us who got interested in books on vampires in the Seventies or Eighties will probably have memories of the name Ornella Volta, as she was the author of an influential book titled Le Vampire: La mort, le sang, la peur, published as volume 8 in the French Bibliotheque internationale d'erotologie by Jean-Jacques Pauvert in 1962, highlighting various erotic aspects more or less related to the vampire theme, and not least including a lot of interesting illustrations. With Valerio Riva she was also the editor of an Italian anthology of both non fictional and fictional vampire texts, published in French as Histoires de Vampires in 1961, and popularly attributed to Roger Vadim, who at the time had just directed his vampire opus Et mourir de plaisir (hard to find on DVD, but currently available on youtube) inspired by Joseph Sheridan Le Fanu's Carmilla.

While collecting a bit of information on various editions of her vampire book some time ago, I noticed on the internet that she moved on to become an expert on the French composer and pianist Érik Satie, and that she is today running the Satie museum at 6 Rue Cortot in Mortmartre, Paris. 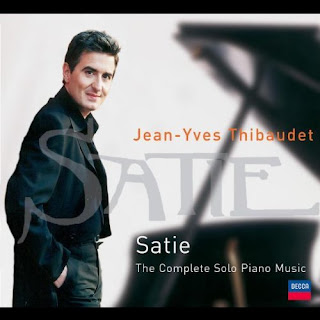 I had almost forgotten about this, until I recently decided to supplement what I had of Satie's compositions for solo piano with a 5 cd collection of his complete solo piano music performed by Jean-Yves Thibaudet and noticed that the liner notes were written by - Ornella Volta!

Thibaudet, by the way, has also recorded the complete works for solo piano of another French composer, Maurice Ravel, including Gaspard de la nuit. The second movement of this composition should be familiar to vampire film enthusiasts, as it was featured in Tony Scott's The Hunger starring Bowie, Deneuve and Sarandon.