The conquest of Belgrade 1717 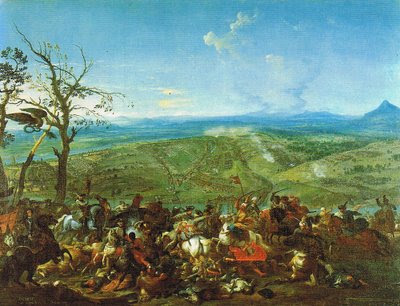 'After Eugene took the Banat fortress of Temesvár in mid-October 1716 (thus ending 164-years of Turkish rule), the Austrian commander turned his attention to the next year’s campaign and to what he considered the main goal of the war, Belgrade. Situated at the confluence of the Rivers Danube and Save, Belgrade held a garrison of 30,000 men under Mustapha Pasha. The siege progressed steadily, but by the first days of August 1717 a huge Turkish field army under Halil Pasha (150–200,000 strong) had arrived on the plateau east of the city to relieve the garrison. News spread through Europe of the imminent destruction of the Imperial army, yet Eugene had no intention of lifting the siege. With his men suffering from dysentery and continuous bombardment from the plateau, Eugene, aware that a decisive victory alone could relieve the army from their dangerous situation, decided to attack the relief force. On the morning of 16 August, 40,000 imperial troops marched through the fog, caught the Turks unawares, and routed Halil Pasha’s army; a week later Belgrade surrendered effectively bringing an end to the war. The victory was the crowning point of Eugene’s military career and had confirmed him as the leading European general; his ability to snatch victory at the moment of defeat had shown the Prince at his best.'

The above painting of the conquest of Belgrade by Jan van Huchtenburg shows Prince Eugene in the lower left corner. Click on the painting to view it in more detail!
Posted by Niels K. Petersen at 09:24