The creation of a modern myth

In 1897, Bram Stoker was asked if there is any historical basis for the vampire legend. He answered:

'It rested, I imagine, on some such case as this. A body may have been dug up and found alive, and from this a horror seized upon the people, and in their ignorance they imagined that a vampire was about.'

It is well known that Stoker was inspired by Emily Gerard's article on 'Transylvanian Superstitions', and as I have mentioned in an earlier post, this was where he found the word 'nosferatu' that he immortalized as a synonym for 'vampire', although no such word actually exists in Transylvania.

But now anyone interested in how Stoker shaped the modern literary vampire with his Count Dracula, is able to study his working notes and literary sources in a remarkable book that I have just received: Bram Stoker's Notes for Dracula: A Facsimile Edition annotated and transcribed by Robert Eighteen-Bisang and Elizabeth Miller with a foreword by Michael Barsanti (published by McFarland).

The above interview is quoted in the overview at the end of the book, where the authors also tell us that 'Stoker did more writing and research on vampires before his vacation in Whitby than many people have assumed. The Notes confirm that he began working on a vampire novel before he discovered the name "Dracula" or chose Transylvania as the monster's homeland.' (p. 284) 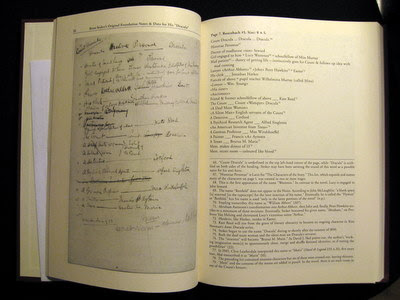 In his foreword, former associate director of the Rosenbach Foundation where the notes are kept, Michael Barsanti writes that 'Bram Stoker's Notes for Dracula are one of the greatest treasures in the Rosenbach Museum & Library - a small house that has been converted into a museum and rare-book library on a shady, residential street in the center of Philadelphia. The Notes are kept in a specially-made box in company with manuscripts by Stoker's fellow Dubliners Oscar Wilde and James Joyce, as well as Joseph Conrad, Lewis Carroll, and other famous writers.'

The Notes were originally first mentioned in a popular book in the late Seventies, but have been studied intensely by a some researchers over the past few years, and many popular myths about Dracula have been debunked, as I have already mentioned in a couple of posts like this one. However, now that the Notes are available to the general reader, anyone with an interest in the genesis of Dracula can study Stoker's hand written and machine typed notes. They give an invaluable insight into what Stoker actually knew about vampires and the so-called 'historical Dracula', as well as knowledge on how the plot and characters developed. It is e.g. quite delightful to see how he initially intended the count to be called Count Wampyr, but later on replaced 'Wampyr' with 'Dracula'!

Apart from the facsimile reproduction and transcription of the Notes, the book contains an overview of the characters, the plot, and the sources. It also contains a short biography and bibliography of Stoker's works, and the 1888 entry on Vampire from the Encyclopedia Britannica which mostly deals with the vampire bat, although both Ranft and Calmet are briefly mentioned.

The Notes, of course, provide no insights into the original vampire cases or the 17th and 18th century magia posthuma, but they allow us to come as close as will probably ever be possible to know how Stoker actually developed his vampiric count and in doing so influenced modern popular culture.

In an essay on 'The Myth of Dracula', the authors try to give a clue to why Dracula has proved to be so popular. As they say, 'Many literary critics are baffled by Dracula's undying popularity.' The Notes will hardly answer that question, but as the authors say:

'Bram Stoker's Notes for Dracula not only reveal the genesis of a novel but serve as the first tentative steps in the creation of a modern myth. They provide a wealth of insights into this tale of "spiritual pathology", which transcends its author's talents as a writer to speak to us today in the timeless language of myth.'

Consequently, I can only highly recommend this important book to anyone interested in gaining that insight.
Posted by Niels K. Petersen at 17:25

The Notes are an important source, and the Miller/Eighteen-Bisang book is highly valuable in making this material available to the public. It is also fascinating to study the original "manuscript" of the narrative (550+ pages of typescript with copious handwritten changes, privately owned). The manuscript, as well as the Notes, are covered in detail in "The New Annotated Dracula," due out from W.W. Norton in October.

Thanks for you comment. I suppose that your information confirms that your book will actually be published this October? It's just that amazon.co.uk claims that it will first be published on February 1st 2009?! In any case I'm looking forward to your book.

My name is Arturo Branco, I am a historian and archeologist in Brazil, and I am finishing my Master Degree with a thesis about the influences of Sabine Baring-Gould's Book of Werewolves in Bram Stoker's Dracula.

I red in McNally & Florescu's In Search of Dracula and Other Vampires that there is a note in Rosenbach Foundation Stoker's Notes that says that Bram Stoker red the Book of Werewolves before writing his book... But I cannot find any source in internet with this passage...