From Germany to Denmark via Norway 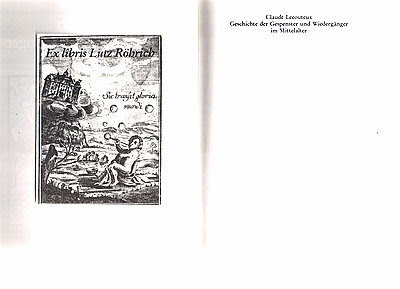 The German translation of Claude Lecouteux' book on the medieval revenants, Geschichte der Gespenster und Wiedergänger im Mittelalter, has unfortunately been hard to get for a while (it was published in 1987). I have been used to using a library copy, but a few months back I finally purchased my own copy. I actually got it from a second hand book store in Norway, and when I received it I was surprised to find that it contains an Ex libris Lutz Röhrich, because Lutz Röhrich actually wrote a foreword to the book. So the copy I now own must have been Röhrich's own copy. Presumably, it was sold after Röhrich's death in 2006, and somehow ended up in Norway before I bought it. So now it's located here in Denmark.

Lutz Röhrich (1922-2006) was a German folklorist who has published a number of books on e.g. fairy and folk tales.

I find that it is a very interesting ex libris. Unfortunately, I have no idea why Röhrich would choose this pessimistic motif. He was a German soldier during WWII and got seriously wounded, so that might have affected his world view. But I really don't know. If anyone does, I would like to hear from you. 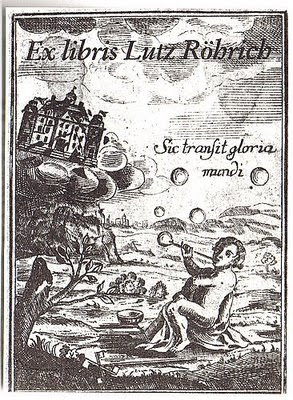 I have previously written about another exlibris.
Posted by Niels K. Petersen at 00:01