I have purchased the Vampire Secrets DVD along with four other Haunted Histories documentaries from The History Channel. Now I have also watched the vampire episode, and, honestly, what a load of ... rubbish!

As one would expect, it's pretty well produced, but the contents are simply so flawed by errors and misinterpretations of fact that it's really hard to understand why a channel like The History Channel lends its name to this documentary. It is claimed that Elisabeth Bathory played some important role in the history of vampires, and furthermore that people in around 1400 would become scared by hearing the word vampire, and that Calmet's Dissertation is some sort of manual for vampire hunters. Perhaps one shouldn't expect more considering some of the 'experts' that have been chosen for the documentary, but in my opinion this kind of misrepresentation of historical facts is more harmful than all the outlandish vampire fictions that we are used to in novels, comics and movies. Unfortunately, it is symptomatic of too many attempts at representing the history and phenomenon of vampires that one is more concerned with presenting chilling tales than in getting the facts and the historical perspective right.

The only really interesting and worthwhile part of the documentary is one in which Mark Benecke describes how the decomposition of actual corpses may have been interpreted as signs of vampirism. Apart from this short part of the documentary, I think that most people will have a better time and benefit more from watching one of the purely fictional vampire movies like those shown alongside the Haunted Histories DVD box in the photo below! 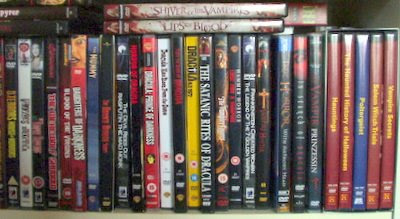