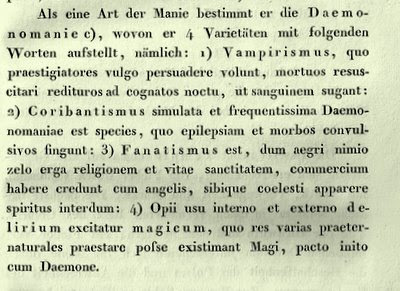 It is well-known that lycanthropy is a term that has been used in psychopathology, but I think it is fairly unnoticed that vampirism also has been used by various authors. The above excerpt from a German book on theories on mental illnesses from 1830 is just one example that vampirismus was used to describe a demonomania that could e.g. involve the belief in being attacked by dead people.

One of the things about the subject of magia posthuma that fascinates me, is how interlinked the concepts involved are with the development of the natural sciences and in general with our ways of perceiving the forces behind our world. Obviously, the concepts of a ghost, apparition or revenant changes over the course of centuries from the late medieval period when it was understood in light of the Catholic belief in Purgatory, through the debates between Protestants and Catholics, the epistemology of natural philosophy, medicine etc., and on to the 19th Century, when revenants are no longer corporeal corpses brought back to life but usually tend to be incorporeal and intangible entities. And so on, we get spiritualism, parapsychology etc., as our Western societies tend to become more and more secular.

Being myself educated in physics, I am pretty much fascinated by what actually happened during the scientific revolution when natural science in a more modern sense became the 'winning' world view. In the naive version, people got enlightened and stopped being superstitious, but history proves this perception wrong. The development was much more complex, and here the history of magia posthuma and vampires is an interesting and thought provoking example, in particular because many of the occurrences occur more or less at the time of what we nowadays would call The Enlightenment.

In fact, the above portion from a book shows that barely 100 years after the word vampire entered European languages, it was a term used in books on mental illnesses. What happened in between? There's an interesting story to tell.
Posted by Niels K. Petersen at 09:44