A stone's throw away 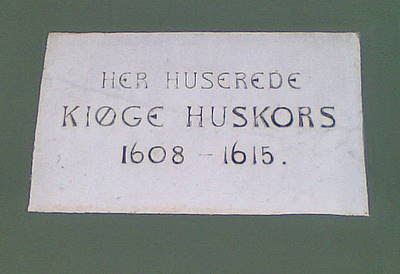 I don't live near places that are known from the history of magia posthuma, but close to my home in the Danish town Køge you can find this plaque on a house just round the corner from the town square. The plaque commemorates the house where one of the most famous Danish witchcraft cases occurred, and as you can see, this year it's exactly 400 years since it began.

The Devil himself was claimed to have been at large in the house, and a certain Johanne Thommeses was accused of having invoked him. Strange sounds were heard in the house, and the Devil was claimed to have been seen several times in different guises over the years in that haunted house. At court, Johanne Thommeses confessed to being a sorceress and accused other women of the same crime. All in all 12 women, including Johanne Thommeses herself, were condemned to be burned at the stake over the next few years as a consequence of the hauntings which occurred more or at less a stone's throw away from my home.