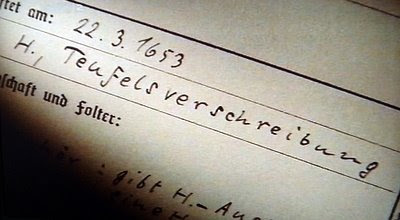 One of the most curious sources for information on the historical witchcraft cases and to some extent to the Magia Posthuma is the archive created by the H-Sonderauftrag or H-Sonderkommando of the SS Sicherheitsdienst (SD) between 1935 and 1944. H is an abbreviation for Hexen, witches. Created by Heinrich Himmler, the researchers of this special and secret part of the SS studied source material in more than 260 archives and libraries throughout German territory and systematically detailed cases of people prosecuted and punished for witchcraft.

The archive consisting of about 33.000 A4-sized entries was found at the end of the war and is now located in an archive in Poznan in Poland. A copy of the archive is also stored in Frankfurt in Germany. In Poznan, the archive also comprises a library of books and pictorial material.

Himmler hasn't left any clear statement on his motives for initiating this large scale research into the witch hunt cases. However, it seems that he wasn't motivated by studying the witch hunters, but rather by sympathy for the Germans persecuted by one nationalsocialism's enemies, the Church. 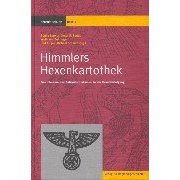 In 1986, the archive was brought to the attention of historians by Gerhard Schormann in a work on the witchcraft cases in Germany, and since then researchers have studied the archives. In 1999, a collection of papers on the arhive was published, Himmlers Hexenkartothek: Das Interesse des Nationalsozialismus an der Hexenverfolgung (Verlag für Regionalgeschichte).

The verdict on the use of the archive for modern historical research is not unanimous. Some find it useful, whereas others are less positive. For instance, Wolfgang Behringer, known for his research into Bavarian witchcraft cases, is adamant in his critique of the quality of the research. It also seems that the methods and insistence of the various H-Sonderauftrag researchers varied a lot, allowing for some parts of the archive to be more useful than others.

Karen Lambrecht who has studied Silesian witchcraft cases, including a few cases of Magia Posthuma, however, found the archive useful for her research. This probably particularly goes for the cases where the original source material that the SS researchers studied, unfortunately no longer exists. 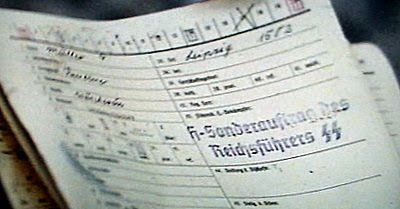 The archive and the H-Sonderauftrag was dealt with in a German three part TV documentary on witches, Hexen - Magie, Mythen und die Wahrheit which is released on DVD this April. It was shown on Danish television last summer, and I include a couple of shots from it here.

Finally, here is a Polish web page in English concerning the H-Sonderauftrag with four examples of archival material: 1, 2, 3 and 4.
Posted by Niels K. Petersen at 10:06